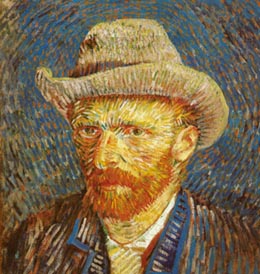 WASHINGTON - The producers of a new film about Vincent van Gogh are rethinking its ending in the wake of a definitive biography that doubts the long-held belief that the Dutch painter took his own life.

“Van Gogh” would be the first English-language feature film about the giant of Post-Impressionism since “Lust for Life” in 1956, in which Kirk Douglas portrayed van Gogh shooting himself while painting in a French wheat field.

In their just-released “Van Gogh: The Life,” biographers Steven Naifeh and Gregory White Smith contend that the evidence points more toward van Gogh being accidentally shot in a French village by teenagers playing with a gun.

“Due to this new development, as of now, the ending of our film is yet to be determined,” the writer and producer of “Van Gogh,” Kira Madallo Sesay of Kalliope Films, told AFP in an e-mail.

No one on the project has so far read Naifeh and Smith’s biography, nor have they been in contact with them, but the validity of the authors’ claim will be “thoroughly” investigated, she said.

“Once we gather the facts and discuss it with our international team of van Gogh experts, who are consulting us on the movie, we will make a decision on how to end the film,” she added.

Naifeh and Smith won a Pulitzer Prize for their earlier biography of Jackson Pollack.