U2 honored as ‘greatest act’ in last 25 years

U2 honored as ‘greatest act’ in last 25 years 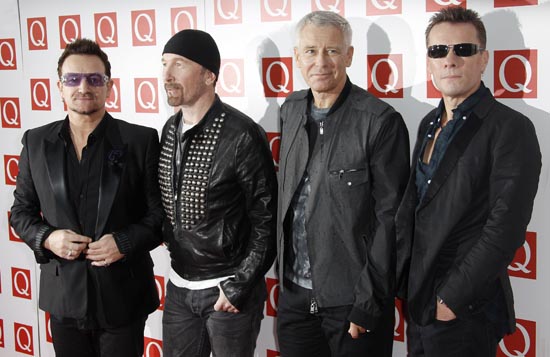 LONDON - Rock icon U2 has something new to brag about - winning Q Magazine’s Greatest Act of the Last 25 Years award.

The annual music awards by Britain’s best-selling music monthly took place Monday in London and the Irish quartet was among the music notables at the ceremony.

The U.K.’s artist of the moment, singer/songwriter Adele, won two awards, for best female and best track for her song “Rolling in the Deep.’’

She didn’t attend, since the event comes just two weeks after she was forced to cancel her U.S. tour due to throat problems.

Coldplay was voted best act in the world today, although lead singer Chris Martin disagreed with the accolade.

“U2 is the best band in the world at the moment. We are about seventh,’’ he said.

Noel Gallagher, one half of the warring brothers who led the rock band Oasis to chart glory, was named a Q icon.

But he said that award did not come close to rivaling his joy when his favorite soccer team, Manchester City, smashed crosstown rival Manchester United 6-1 on Sunday.

“No award can compare to that. That was the best day of my life, bar my children being born,’’ Gallagher said.

Eighteen awards were handed out, including to rapper Tinie Tempah for best male artist and to U.S. internet sensation Lana Del Ray, who was crowned “the next big thing.”

Brian May and Roger Taylor accepted entry into the Q Hall of Fame on behalf of glam rockers Queen, and Take That’s Gary Barlow was honored as a classic songwriter.