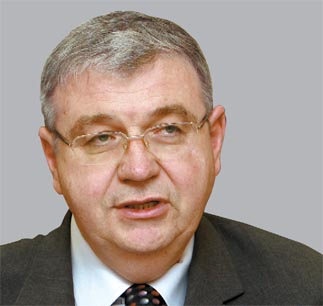 The soldier-for-prisoners swap between Israel and the Palestinian militant group Hamas early last week was not an easy decision for the Israeli government to make, but it shows the value the country places on the lives of those servicemen who risk everything to defend its borders, according to Tuvia Israeli, Israel’s ambassador to Korea.

Although similar swaps had previously taken place, nothing on this scale had ever been agreed to. After five years in custody, Sgt. First Class Gilad Shalit was returned to his family by Hamas in return for the release of 1,027 Palestinian prisoners. This triggered complaints from within Israel over the fairness of the deal in comparison with previous cases.

Natural concerns were also raised that the released prisoners may well try to attack Israel, as most were known or suspected Hamas members.

During the joint interview, the envoy said the movement toward democracy that is sweeping through the Middle East - which gained more momentum on Thursday with the death of Col. Muammar el-Qaddafi - presents both an opportunity and a risk for Israel.

Israeli, who took office in Korea in August 2009, also talked about his interest in local culture, and said the growing discovery of the country by the people of Israel would accelerate bilateral relations, which officially began almost 50 years ago. Here are some excerpts of the interview:


Q. Let’s talk about the Middle East. What would you like to say to the Egyptian people?

A. I hope the people of Egypt can enjoy a free and liberal country. They will be able to take ownership of their own destiny.

Do the events unfolding in the region represent an opportunity or a crisis for Israel?

It is an opportunity and also a danger. We share a border with Egypt, Syria, Jordan and Lebanon. Any big change, shift of power or shift of policy directly impacts us. We are following these developments very closely. We have already seen some negative results from these changes, such as two attempts by the Syrian military this May to allow Palestinians to cross the border with Israel, which they normally would prevent.

Korea and Israel will mark the 50th anniversary of diplomatic relations next year. How do you see ties developing in the future?

Korea is doing very well and Israel is also doing not too badly. Korea is a leading producer in many important fields, from shipping to cars to nuclear power stations. Israel is producing small components, so we are not competing. And why does Korea need Israel? Israel has no fuel. It has a small market and few raw materials. But it has high technology. Israel develops unique products in a number of fields .?.?. water technologies, defense technologies and IT technologies are all by-products of these.

Is there anything about the character of the Israeli people that could help create synergy between the two sides?

In Israel, we use the word “chutzpah.” It is a very complicated word. It has a negative explanation and a positive one. The negative one is somewhat impudent, as in not doing what you are asked by your parents, elders or superiors, or to answer back impolitely. But it also has a positive connotation, which means to always persevere no matter what others say, and never to be satisfied with what you have now. The positive connotation demands that you take responsibility.

Korea is in talks with Israel about exporting its T-50 Golden Eagle trainer jets. How do you expect the deal to turn out?

The fact that Korea is a strong candidate is in itself a big compliment for Korea. I don’t mean to sound patronizing, but you can understand that we are looking at the best of the best. Regarding defense-related expenses, we are looking for a good package, a good agreement for future cooperation, both in development and R&D between the Israeli and Korean defense industries. My hope is that we will succeed. I think the opportunity for future cooperation will be much stronger if that happens. The decision will be made by end-users and professionals, while the government will also have its say. The decision will probably be made by the end of this year.

We have heard a little about your family’s history as victims of the Holocaust. Can you elaborate?

My story is a very difficult one. I was born in Romania. My parents, Holocaust survivors, were in their early 20s during [World War II] when they lost their parents and other siblings. My father was in a forced labor camp. They got married after the war.

After the war, Romania was under Communist rule and they were not very willing to release Jewish people to go to Israel. But after some years, the Israeli government practically paid a ransom for every Jew they let out. That’s the way my family was allowed to go to Israel in 1962. I was seven years old. I have one older brother and we four went to Israel.

They owned nothing except the clothes that they were wearing. They worked very hard to make sure my brother and I got the best education, and the best opportunities. Actually, this is a story that many people in Israel can tell or relate to, especially those considered to be the second generation of Holocaust survivors.

They couldn’t throw away a single piece of bread because they remembered how much they went without during the war. And interestingly enough, they never spoke about what they had gone through. Only when I got married and we had children, and the children grew up and asked about what had happened - only then they were willing to open up and tell them the story. Of course, it was a horrible story.