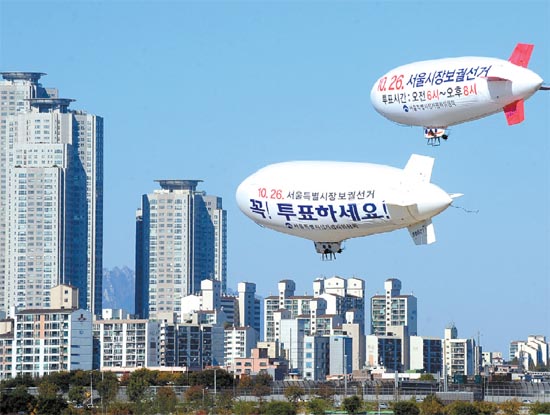 
By-elections will be held today in 42 electoral districts across the nation to elect 12 heads of local governments, including the mayor of Seoul, one of the most powerful positions in the country.

The by-elections are being viewed as a preview of next year’s general elections in April and the presidential election in December, especially as presidential contenders have lined up behind two of the three candidates in Seoul.

Political observers say that voter turnout by age group will be a major component to watch. Young voters are inclined to vote for liberal candidates, while older voters tend to support conservatives.

Polls will open from 6 a.m. until 8 p.m. In past elections, older people have tended to vote early, and surges of young voters in the afternoon and evening have swung races. In recent contests, young voters have gone to the polls after being encouraged by messages on social networking services.

On the eve of the Seoul mayoral election, former Representative Na Kyung-won, the ruling Grand National Party nominee, and Park Won-soon, the unaffiliated candidate backed by liberal opposition parties, crisscrossed the capital yesterday to make last-minute appeals for support. According to polls last week, the last time allowed under the election law, the race was neck-and-neck.

The election was prompted by the resignation of former Mayor Oh Se-hoon, who stepped down in late August after his referendum to curtail the city’s free school lunch program failed to garner the minimum voter turnout to be considered valid.

Na, 48, a former judge and two-term lawmaker, rode public buses and the subway yesterday to rub elbows with Seoul residents. She was to attend a large campaign rally with GNP Chairman Hong Joon-pyo later in the day, according to her campaign. 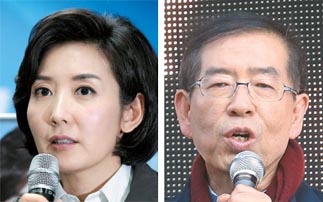 The by-election has drawn intense attention because Representative Park Geun-hye, the GNP’s leading presidential hopeful, has campaigned for Na, an indication that Park was moving forward with her second bid for the presidency.

In the loosely united opposition camp, popular software mogul Ahn Cheol-soo backed Park, showing up for a media briefing and delivering a letter of support on Monday.

The media-shy Ahn, who is popular among young and independent voters for his clean, apolitical image, stunned the main political parties when opinion polls showed him as the preferred choice for the presidency.

The conservatives attacked the independent Park, saying his weak political background and lack of a party would cause chaos in city affairs.

Park called on voters to make their own judgment and not base their decisions on the “massive negative campaign” by his rival.

“Only one day is left before the battle,” Park said. “Do you want change or just another version of ex-Mayor Oh Se-hoon?”