In English autobiography, Lee recounts his rise and vision ahead

In English autobiography, Lee recounts his rise and vision ahead 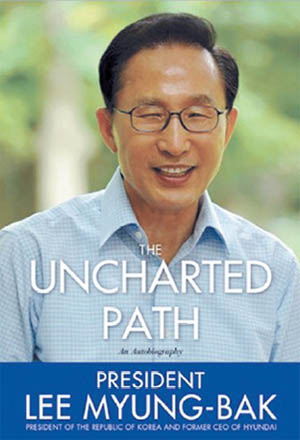 President Lee Myung-bak reiterates his commitment to unification with North Korea and his trademark policy of “green growth” in his upcoming autobiography, saying that a unified Korea would be a blessing for the world and that he would continue championing a greener future after leaving office.

“A peaceful peninsula will have enormous benefits that will go far beyond the region,” Lee writes in the English-language autobiography, titled, “The Uncharted Path,” which is set to hit store shelves on Nov. 1 in the United States.

Yonhap obtained a copy from the Blue House.

“It is not surprising that the question I get asked most often is whether I see the Korean Peninsula eventually reuniting, and if so, when I expect that to happen. I honestly do not know when, but I do know that it will happen,” he said. “Permanent peace is possible on the Korean Peninsula, and a stable and unified Korea will contribute to global peace and prosperity.”

The book is mostly a translated version of Lee’s best-selling Korean-language autobiography, “There Is No Myth,” which was first published in 1995, but the English-language edition has additional chapters about his life as Seoul mayor and president.

Lee, 69, who earned the nickname “Bulldozer” for his drive to push through challenges and get things done as CEO of Hyundai Engineering and Construction in the 1970s-1990s, took office in early 2008 on a wave of popular support for his promises to catapult Korea to join the ranks of advanced countries. During his campaign, he urged voters to elect an “economic president.”

But the global financial meltdown later that year dealt him a blow.

Lee confesses in the book, “I never dreamed that barely a year after taking office, I would have to struggle to keep the Korean economy from sinking. It was a chilling reminder of how fragile our world is, how ill-prepared we can sometimes be, and how in this era of connectivity our collective fates - for better or worse - are tied together.”

The financial crisis led to the creation of the Group of 20, a forum made up of major advanced and emerging economies that has been credited for helping the world get out of the crisis. Korea is a member and hosted a summit in November last year, a feat that Lee takes great pride in.

Korea also pulled itself out of the financial crisis earlier than other nations.

“There were painful moments to endure and difficult decisions to make. But there have also been proud achievements and joyous celebrations,” Lee writes in the book. “For example, I was proud when Korea successfully hosted the G-20 Seoul summit, thereby contributing to charting a new path forward.”

Another focus of his administration was his “Low Carbon Green Growth” policy.

It calls for lessening Korea’s dependence on fossil fuels and developing alternative energy sources, such as solar and wind power, and other technologies that increase energy efficiency to cope with climate change.

Lee believes the strategy will provide Korea with fresh growth engines for its economy and help the country - one of the world’s biggest greenhouse gas emitters - reduce emissions of carbon dioxide and other heat-trapping gases amid growing calls to curb global warming.

In the book, Lee says he will continue to work for the cause after retirement in early 2013.

“After I leave office, I will continue to serve. I will visit my friends abroad and work with them so that all of us can enjoy a more sustainable and greener future,” he says. “I will take part in educating our children about the importance of sustainability, green growth and protecting our environment.”

Lee also says he will use his charity foundation, the Lee & Kim Foundation, to help younger generations suffering from poverty and other difficulties, like he did five decades ago. Lee gave up most of his personal assets to establish the foundation named after him and the first lady, Kim Yoon-ok.

In the autobiography, Lee also recounts how he, as Seoul mayor, overcame widespread opposition to a previously inconceivable project to open up the long-paved-over Cheonggye Stream to create a new landmark in the capital.

“From July 2002 until June 2003, our team met with the shopkeepers a total of 4,200 times,” Lee says. “We resolved close to 1,000 requests. As a result of such strenuous effort on our part, the shopkeepers and various organizations finally agreed to our plan just fifteen days before the scheduled start of the project.”

The autobiography also chronicles Lee’s rags-to-riches story, including his family’s poverty in the wake of the Korean War and his rise to become the CEO of Hyundai Engineering and Construction, a member of the National Assembly and then the mayor of Seoul.

“Poverty clung to my family like a leech,” Lee writes. “Taking lunch to school was, of course, out of the question. While other kids ate their lunches, I would go outside to the water pumps and fill my stomach with water. I remember drinking until I became bloated. That’s when I learned that no matter how much you drink, water never makes you full.”