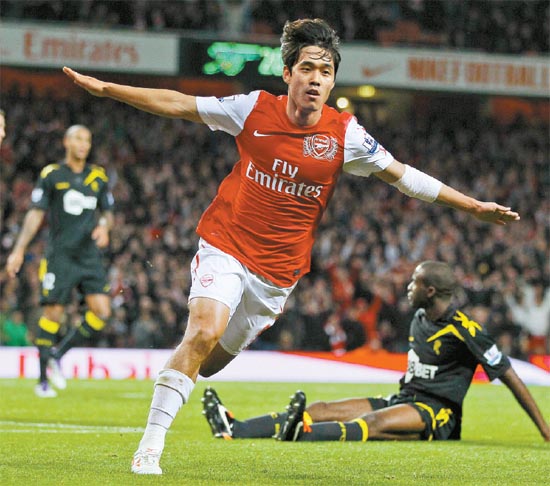 Arsenal’s Korean striker Park Chu-young celebrates after scoring a goal against Bolton Wanderers during their English League Cup match at the Emirates Stadium in London, Tuesday. Park scored his first goal for Arsenal since transferring from AS Monaco this August. Arsenal won 2-1. [AP/YONHAP]


LONDON - Arsenal manager Arsene Wenger believes Park Chu-young is ready for his Premier League debut after the Korean striker scored his first goal for the Gunners in a 2-1 League Cup win against Bolton.

Park was making just his second start following his move from Monaco in August and he gave a tantalizing glimpse of his potential with a well-taken winner in the second half of the fourth round tie at the Emirates Stadium on Tuesday.

The 26-year-old Korea captain, who has yet to make his Premier League debut, gave an intelligent display capped by his curling 56th minute strike.

Park had already gone close twice in the first half as he led the Arsenal attack in energetic fashion and Wenger has said he is confident Park will have a significant part to play now that he is used to the frenetic pace of English football.

He could make the bench at Chelsea this weekend and Wenger said: “For me I am very pleased with his performance, it was very good. He has shown intelligence in his link play with others, the quality of his movement was exceptional and his finishing was fantastic.

“Compared to how he played in the first League Cup game against Shrewsbury when he was a bit inhibited, this time we saw what a good player he is. He has shown he is ready to play league games.”

Wenger’s side trailed to a goal from former Arsenal trainee Fabrice Muamba soon after half-time, but Andrei Arshavin equalized in the 53rd minute before Park struck from Arshavin’s pass to complete the comeback.

Arsenal had to ride their luck after that as Bolton pushed hard for an equalizer, with Wenger frustrated to see Belgian defender Thomas Vermaelen ask to come off in the 85th minute as the visitors laid siege to Lukasz Fabianski’s goal.

Vermaelen, captaining Arsenal in his first appearance for two months after an Achilles injury, felt his calf muscle tighten up and made it clear he couldn’t continue. He is now uncertain for the Chelsea game.

“He had to come off with a calf problem. I hope it is not too bad, he may be a bit short for Saturday, we will have to test him,” Wenger said.

Wenger was delighted to see Arsenal close out their seventh win in eight games after his side were written off in the aftermath of that 8-2 humiliation at Manchester United.

“We want to keep going and it is down to us to change people’s minds,” Wenger said. “We know there is still room for improvement, but we are getting better and better.”

Owen Coyle was frustrated that his team’s late pressure failed to net an equalizer, especially since they had a strong penalty claim turned down after Emmanuel Frimpong tripped Gary Cahill.

But the Bolton boss conceded poor defending had played just as big a role in his team’s eighth defeat in nine games.

“Arsenal have scored two goals from two shots on target and never had another shot for the rest of the half,” Coyle said.

“They were good goals but they could have been avoided. Arshavin has got to be closed down.

“You can’t allow a player like that into the box. You are going to pay a heavy price and we did.

“Then we gave away the ball and Park made a sublime finish. That’s why you pay millions of pounds to sign him from Monaco.”

Meanwhile, Manchester United bounced back from its derby humiliation by cruising to a 3-0 victory over fourth-tier club Aldershot in the League Cup.

United had the perfect tonic after its heaviest home defeat in the league since 1955, with a completely changed team having little trouble disposing of the lowest-ranked side left in the League Cup.

Berbatov netted his first goal of the season after 15 minutes after receiving a pass from Park Ji-sung who played a one-two with Tom Cleverley on the edge of the box.