In Deoksu Palace show, art stands in for speech

In Deoksu Palace show, art stands in for speech 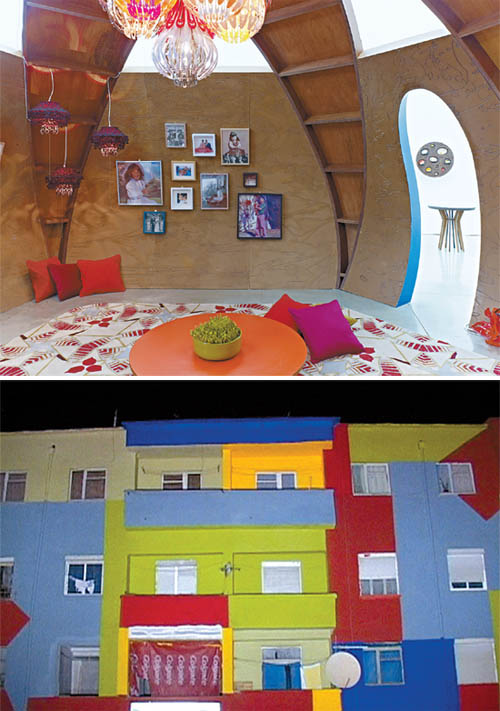 Jorge Pardo’s “Bulgogi,” top, and Anri Sala’s “Dammi I Colori,” below, are two of the works featured in the “Art of Communication” exhibition running through Dec. 4 at the Deoksugung Annex of the National Museum of Art in central Seoul. Provided by the museum


Golden helium balloons in the shape of cartoon speech bubbles fill the ceiling of a large exhibition room at the Deoksugung Annex in northern Seoul. As visitors walk through the room, looking up at the golden cloud of balloons, they seem to be trying to understand how to interpret speech bubbles that are devoid of words.

The scene of the people in the crowd walking along with their heads tilted back, wearing different expressions on their faces, together with the speech bubble balloons on top of their heads, looks like a cartoon strip in and of itself, as if the balloons represent a collective, suspended discourse.

“One of the important characteristics about the works by this artist is that he always leaves room for different interpretations by his viewers,” said curator Sooyoun Lee, referring to the artist, Philippe Parreno and his installation “Speech Bubbles.”

“We selected him for this exhibition because of his unique way of trying to connect and communicate with viewers. His works suggest that he wants to share the products of his imagination but in diverse ways.”

The work is part of the exhibition “Art of Communication,” which continues through Dec. 4 at the Deoksugung Annex of the National Museum of Art in central Seoul.

Ranging from video, installation and multimedia art, the works “demonstrate the artists’ interest in translating into art elements of their everyday lives, their social surroundings and the communication between individuals and societies,” Lee said.

Jorge Pardo’s “Bulgogi,” a circular drawing room made to look like someone’s home, represents the artist’s interpretation of Korean culture. Inside the room - which is furnished with a red and gold chandelier, bright orange tables, colorful jewelry and other decorations - there are photos of Koreans of now and decades past. The artist said he took his inspiration from the Korean community in Los Angeles.

“Ironically, this work does not feel very Korean to Koreans,” Lee said. “It feels more like the Cuban artist’s interpretation of Korean-American society in L.A. That echoes our theme of communication, in that the artist, while trying to convey Korean culture to his viewers, gives a nonauthentic reinterpretation of the culture instead.”

Meanwhile, in Ham Yang-ah’s video installation, “Bird’s Eye View,” the interpreters of the outside world are pigeons.

The piece consists of three video monitors showing different but related footage. One video, which shows shaky footage of the streets of Seoul, was actually shot by attaching a camera to a pigeon. The other videos show pigeons flying over buildings and pigeons captive inside a room.

The city that captivates Anri Sala in his work “Dammi I Colori,” is Tirana, the capital of the artist’s home country of Albania. “Albania is like the North Korea of Europe in many ways, so isolated and in such a dire condition,” said Lee.

The 15-minute video feels like a mixture of a documentary and a painting, as the artist uses various visual techniques to create a surrealistic ambience for the film, which was shot in Tirana.

The work was the brainchild of the city’s mayor, Edi Rama, who is also a friend of the artist and an artist himself. Rama proposed painting the city’s monochrome buildings in bright shades of red, yellow and blue. The video shows what the colors mean to the residents of Tirana and how this seemingly small change inspires new hope in the city.