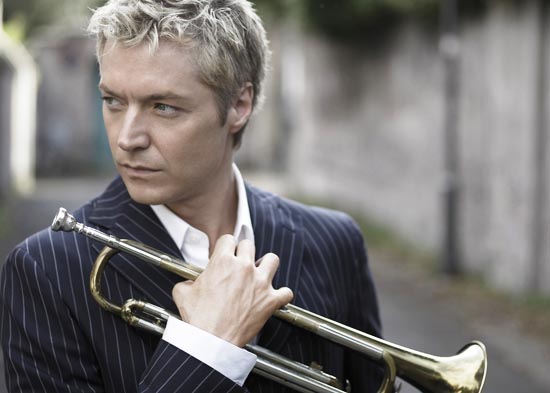 Jazz musician, trumpeter and composer Chris Botti will hold his third concert in Korea on Nov. 6 at the Sejong Center for the Performing Arts’ Grand Theater in central Seoul. See MUSIC. Provided by SMI Entertainment

Tomorrow: Popular Japanese heavy-metal band X Japan is currently on its 2011 world tour, and Korea is its first stop in Asia. Besides being one of the first Japanese acts to achieve mainstream success while on an independent label, the group is widely credited as one of the pioneers of the “visual kei” (visual style) movement. The group caused a sensation in the Japanese music scene in 1985, rising to stardom with the flamboyant makeup, costumes and hair styles that are characteristic of the movement.

Nov. 4: Celebrated Italian baroque ensemble Europa Galante, led by baroque violinist Fabio Biondi, returns with British tenor Ian Bostridge. Together, they offer a program exploring the music of three superstar tenors of the 18th century who dominated the European opera scene: Borosini, Fabri and Beard. The arias dedicated to these singers will be presented alongside instrumental overtures and suites performed by Europa Galante.

Nov. 6: American jazz musician, trumpeter and composer Chris Botti will hold his third concert in Korea. He will perform with guitarist Mark Whitfield and drummer Billy Kilson, along with keyboard player Andrew Ezrin and violinist Caroline Campbell. Also joining him is vocalist Lisa Fischer, who has worked with such artists as Tina Turner and The Rolling Stones.

Botti is known for complimenting Korean fans as one of his top five audiences for their enthusiasm and passion.

Nov. 6: After a run of consecutive sold-out performances with his Beethoven and Schubert projects, cellist Yang Sung-won has formed a new piano trio named Trio Owon with long-time colleagues violinist Olivier Charlier and pianist Emmanuel Strosser. In their first concert as Trio Owon, they will present piano trio pieces by Mendelssohn, Schumann and Brahms.

Nov. 11: The Moscow Philharmonic Orchestra, regarded as one of the world’s finest symphonic ensembles, is set to perform a concert in Korea.

Nov. 23 to 24: Jose Carreras returns to Korea for a command performance.

Carreras gained fame as one of The Three Tenors along with Placido Domingo and Luciano Pavarotti in a series of mass concerts that began in 1990 and continued until 2003. He has also performed and recorded with artists from outside the classical music world, such as Diana Ross, Peter Maffay, Sarah Brightman and Giorgia Fumanti.

Today to Sunday: Icelandic theater troupe Vesturport returns with an acrobatic version of “Faust.” The troupe is led by Gisli Gardarsson, in collaboration with the Reykjavik City Theater. Since its premiere in Reykjavik in January 2010, “Faust” has been a great success, with 36 sold-out shows in a row in London last October.

To Sunday: This festival returns for its fifth year with 30 productions by theaters from nine countries. The festival closes with the musical “Kim Hong-do,” about the legendary painter.

Subtitles are in Korean and English.

To Monday: Founded in 2001, this is one of Korea’s most prestigious culture and arts festivals, offering theater, dance, multimedia and impromptu street performances.