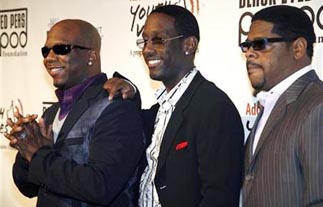 NEW YORK - In 1991, Boyz II Men arrived on the pop music scene with their own brand of R&B that peppered Motown-like harmonies with New Jack Swing, a genre that fused R&B, hip-hop and pop music.

The following year their wrenching ballad “End of the Road” sent the Philadelphia natives to international superstardom, and on Tuesday, the band released “Twenty,” a double-disc album of new and revisited material commemorating the 20th anniversary of their debut album, “Cooleyhighharmony.”

The 20-song collection is comprised of 12 new tracks and eight newly recorded versions of classics like “Motownphilly” and “I’ll Make Love to You.”