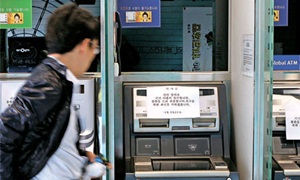 Hidden fees in the financial industry have triggered the ongoing controversy about card transaction costs and other related issues, which has engulfed the credit card and banking sector in recent weeks and is threatening to spill over into other areas.

Office worker Oh Sang-hyuk is a case in point, as the 41-year-old has seen his accounts slowly eroded by transaction fees this year.

Oh often uses ATMs after banking hours or on weekends - when their usage comes at a surcharge - and in the past five months he has paid 14,400 won for 12 such transactions.

He also came up against extra fees when conducting stock transactions. During Korea’s market rout in August, the salary man saw his stock value plummet by 50 percent. He responded by liquidating all of his shares the following month, and the brokerage took its commission of 2,500 won. It then claimed another “front-end fee” of 50,000 won when he dumped his remaining funds in a bond investment fund.

The last straw for Oh was when he tried to pay off a separate bank loan - worth 30 million won earlier this month - and the teller told him he had to pay 160,000 won in prepayment penalties.

“I asked them why I had to pay [the penalties] in order to simply repay my loan,” Oh said. “I didn’t realize how all these fees can add up.”

Financial companies are now trying to fix the problem, however, to keep customers like Oh coming back.

The government-owned Industrial Bank of Korea did away with all of its additional ATM transaction fees levied after banking hours.

The IBK followed the lead of major commercial banks like Kookmin, Shinhan and Hana, which announced they would lower their wire-transfer fees across the board on Tuesday.

And Korea’s top regulator said the hunt to track down and streamline hidden fees in the financial sector is only just beginning.

The IBK also announced yesterday that it has slashed by an average of 60.4 percent all ATM transaction fees, including those made for withdrawals and money transfers to accounts in other banks.

“We are giving back to the customer 60 percent of our previous profits from ATM transactions,” said an IBK spokesperson. “We will strive to have the lowest fees in the banking sector in the future.”

A wave of cuts for ATM transaction fees was already announced by the three major banks on Tuesday, including a complete waiver for those made to accounts within the same bank.

Woori Bank, which already implemented cuts in this area last month, announced further reductions, and others that apply to over-the-counter money transfers.

With brokerages and other financial sectors reportedly debating whether to lower their fees or penalties, associations that represent banks, life and general insurers, securities brokerages and consumer finance and card companies are getting ready to jointly announce a plan today. This is expected to detail how they plan on making the kind of “social contributions” that have been demanded of the financial industry.

But the hunt for ways to “rationalize” financial transactions is far from over. According to Kwon Hyouk-se, governor of the Financial Supervisory Service, regulators hope to ease consumers’ burdens from these extra fees by shaving off an estimated 1.2 trillion won each year.

This sum is based on lower penalties at commercial banks when borrowers miss repayment deadlines. It also requires that interest rates on loans taken out against insurance policies are scaled back, insurance rates for term life insurance policies are reduced when they are renewed, rates on student loans are lowered, and credit card transaction fees are minimized, among other measures.

“Polarization and income disparity is a common problem in both the U.S. and Korea, [...] but Korea has been identifying and presenting solutions to the problem long before [the U.S., such as] when it endured the Asian financial crisis [in 1997] and the 2008 global financial crisis,” Kwon said.

“All blame cannot be laid at the feet of the financial companies,” he said. “The development of financial services in Korea was retarded by the overriding need to support the manufacturing sector so that its competitive ability could grow to its current world-class level.

“But financial services must fulfill a private profit-seeking role and a public role.”