Rangers try to stop Pujols from burning them again

Rangers try to stop Pujols from burning them again 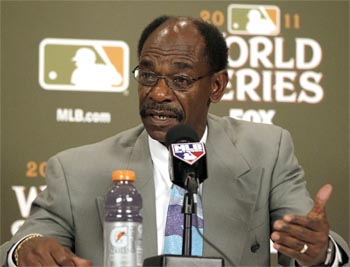 ST. LOUIS - After being burned by Albert Pujols in record-setting fashion, Texas Rangers manager Ron Washington is making no excuses for being cautious.

The Rangers hold a 3-2 edge in the best-of-seven World Series and can seal their first championship when they play the Cardinals in St. Louis on Wednesday.

Pujols, a three-time National League MVP, belted three homers and had six runs batted in during a 16-7 Cardinals win on Saturday and Washington learned his lesson.

“It’s obvious why,” Washington told reporters Tuesday. “He’s one of the best players, hitters in the game. His importance in that lineup is to drive in their runs.

“I just don’t think any manager, when the games are dwindling down, will allow Albert to swing the bat to beat you. That’s not taking anything away from [Matt] Holliday or [Lance] Berkman, because we know what they’re capable of doing.

“But we’re just not going to let Albert do it.”

Pujols is hitting a modest .278 during the Fall Classic, but after setting or tying a slew of records during his Game 3 outburst, Washington had seen enough.

The manager, as a rule, does not like to issue intentional passes but he does make exceptions.

“It’s because one guy is Albert Pujols and one guy is [Detroit Tigers slugger] Miguel Cabrera,” said Washington.

“I’ve never seen Albert Pujols before, other than on TV. It’s my first time seeing him. And what he did the other night, no, I wouldn’t mess with that.”

Washington said he manages with instinct.

“I do a lot by my gut,” he said. “There may be a point where someone says, ‘You should have done this.’ Well, you don’t know my players. That’s you saying that. Maybe the strategists say that’s what you do, but the flow of the game says something different. I’m in the flow.”

Colby Lewis will start Wednesday for Texas, facing St. Louis left-hander Jaime Garcia. If the Rangers lose, they get one more chance to wrap it up Thursday in the series finale.