Mobiles place LG back in the red

Mobiles place LG back in the red 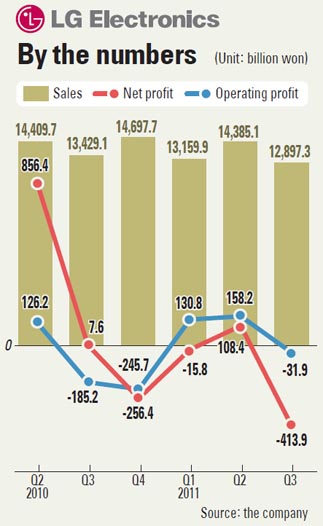 LG Electronics, the beleaguered Korean consumer electronics giant, is back in the red.

The company, the world’s third-largest manufacturer of mobile phones after Nokia and Samsung Electronics, announced yesterday that it posted a net loss of 413.9 billion won ($366.7 million) for the third quarter. That compares to a net profit of 7.6 billion won in the same quarter last year.

A loss was expected by the market - amid the company’s persistently disappointing smartphone sales - but it was larger than anticipated.

The company posted record operating losses in the third and fourth quarters of last year due to its belated response to the smartphone boom - the first time it swung into the red since it started to report consolidated earnings in 2007.

Things were better this year and LG managed to swing back into the black, reporting operating profits in the first quarter and even bigger profits in the second.

But it’s obvious the company’s troubles are not over yet.

Once again, mobile was to blame.

Sales for the three months that ended Sept. 30 amounted to 12.9 trillion won, down 4 percent on-year, LG said in a regulatory filing.

LG sold 6.8 million flat-screen TVs in the third quarter thanks to solid demand from developing countries, it said.

Similarly, despite the economic slowdown in the U.S. and Europe, LG’s refrigerator and washing machine businesses did well in emerging markets like India and Latin America. This allowed the home appliance unit to report 70.1 billion won in profit, up 10.7 percent on-year.

Unfortunately, such improvements weren’t good enough to cover for the hemorrhaging losses at the mobile communications unit.

The mobile communications division posted an operating loss of 138.8 billion won in the July-to-September period, staying in negative territory for the sixth consecutive quarter.

LG said it sold 21.1 million mobile phones in the third quarter, but declined to break out smartphone sales.

“Due to the delayed launch of the new model after the Optimus One smartphone, LG’s smartphone sales fell short of expectations,” Park Won-jae, an analyst at Daewoo Securities said in a recent report.

In comparison, Apple said it sold 17.07 million iPhones in the cited period, and Samsung tentatively said it sold at least 20 million smartphones.

About a month ago, the market consensus had it that LG would post an operating profit of 18.9 billion won.

But as global ratings agencies recently downgraded the company’s outlook citing the competitiveness of its mobile communications division, analysts also gave grimmer forecasts, with some even predicting that the company will report operating losses of over 38 billion won.

Earlier this month, Moody’s Investors Service said it had cut its outlook on LG Electronics Inc. to negative from stable, citing its loss-making mobile business and the global economic slowdown.

“[LG Electronics] will rely on the adoption of LTE [Long Term Evolution] smartphones and further gains in its 3-D TV market share to restore profitability. But the achievement of both carries significant execution risk,” said Annalisa DiChiara, a vice president and senior analyst at Moody’s.

On the following day, Standard & Poor’s lowered the long-term corporate credit and senior unsecured debt ratings by one notch.

LG Display, of which LG Electronics owns a 38 percent stake, posted operating losses in the past three quarters, and LG Innotek is also expected to swing into the red in the third quarter and stay there for several more.

Analysts say things will likely get better in the fourth quarter or the first quarter of next year. And that the key for a turnaround lies in the 4G phones.