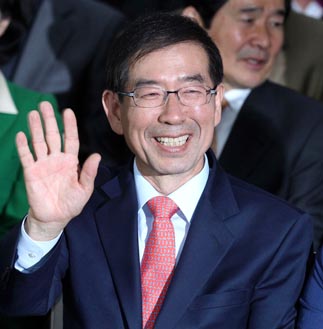 Park Won-soon, a liberal independent candidate in the Seoul mayoral by-election, led exit polls yesterday by a single-digit margin against the ruling party's Na Kyung-won in a crucial race seen as a prelude to next year's general and presidential elections.

According to an exit poll conducted by three major broadcasting networks - KBS, SBS and MBC - Park was leading the race with 54.4 percent of the vote, while Na was trailing with 45.2 percent.

The atmosphere at the GNP's headquarters was heavy after the polls were released. In the live broadcast at 8 p.m., Na was not seen at the headquarters.

In addition to the Seoul mayoral race, elections were held to fill vacancies at 11 district governments, 11 metropolitan legislative councils and 19 district councils. Polling stations at 42 electoral districts around the nation opened at 6 a.m. and closed at 8 p.m. The National Election Commission said the outcome of most races was expected to be announced around midnight.