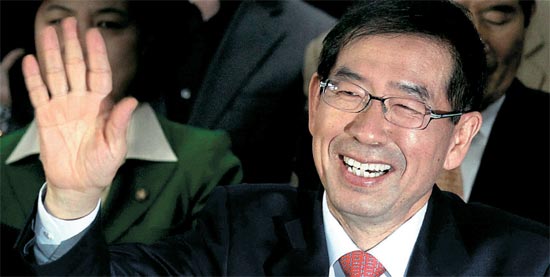 
Park Won-soon, the liberal independent candidate, was elected Seoul’s 33rd mayor in Wednesday's by-election, dealing a blow to the struggling ruling party ahead of next year's parliamentary and presidential votes.

Park won the by-election with 53.4 percent of the votes against his ruling Grand National Party rival Na Kyung-won's 46.21 percent, according to the National Election Commission.

Park’s victory signals a seismic change in the country’s political landscape, which has long been dictated by party politics. Park, a human rights lawyer with no party affiliation, became an overnight darling of liberals and young voters fatigued with business-as-usual, conventional politicians.

"Citizens won against power and their voting defeated the old era," Park said in his acceptance speech as ballot counting reached its final stage. "Common sense and principle prevailed."

Park thanked the opposition parties and civic groups that supported his campaign and fund-raising after he was chosen as unified candidate in a primary against a two-term lawmaker of the main opposition
Democratic Party.

"The spirit of unity will be realized through administrative affairs," Park said, stopping short of whether he would join any political party.

The final turnout for the Seoul mayoral race was 48.6 percent, the National Election Commission said, higher than most by-elections. The 48.6 percent turnout built unevenly through the day but surged in the late afternoon and evening, as people got off work. The near 50 percent turnout was a signal of Park’s victory, as young and working-class voters made their way to polling stations early in the morning and after office hours.

An exit poll jointly conducted by the country’s three major broadcast networks - KBS, SBS and MBC - had Park with 54.4 percent of the vote, while Na trailed with 45.2 percent.

The atmosphere at the Grand National Party’s headquarters was heavy after the results of the exit polls were announced. In a live broadcast at 8 p.m., Na was not seen at the headquarters or in her campaign office. But shortly after 8 p.m., Na campaign officials reluctantly admitted that the outcome wouldn’t be favorable to her.

The ruling party’s defeat in the Seoul mayoral race will likely deepen the lame-duck status of President Lee Myung-bak, especially after controversy over the first family’s buying of real estate for a retirement home for Lee broke out in the middle of the campaign, dealing Na a serious blow.

Park’s victory is expected to fuel speculation that Ahn Cheol-soo, a software mogul who supported Park during the campaign, will run in the next presidential election. Ahn has said his goal is to end the GNP’s rule, but he hasn’t declared a presidential bid. In polls, Ahn’s meteoric rise was evident as he was ranked as the frontrunner in the presidential race. Until recently, Park Geun-hye of the GNP was seen as unbeatable.

In addition to the Seoul mayoral race, elections were held to fill vacancies at 11 local governments, 11 metropolitan city councils and 19 district councils. Polling stations at 42 electoral districts around the nation opened at 6 a.m. and closed at 8 p.m. The National Election Commission said the outcome of most races were expected to be announced around midnight.

With eight victories, Park Geun-hye, former chairwoman of the ruling party and front-runner in the next year’s presidential race, once again vindicated her influence in the elections.