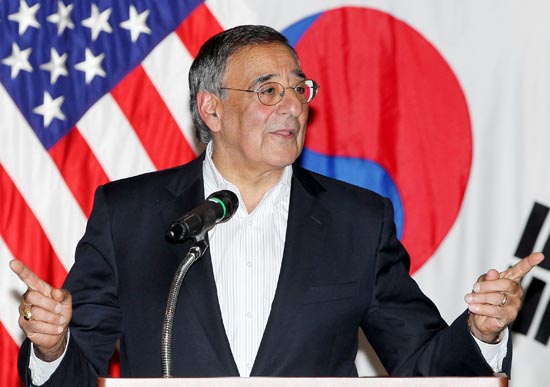 Panetta will meet with his South Korean counterpart, Minister of National Defense Kim Kwan-jin, at the 43rd Security Consultative Meeting (SCM) on Friday and will also pay a courtesy call to President Lee Myung-bak during his three-day stay.

Panetta was also scheduled to hold a town hall meeting yesterday with some U.S. troops stationed in Seoul.

The SCM is an annual meeting between the defense chiefs of the long-time allies and is held alternately in Seoul and Washington.

Friday’s meeting is the first SCM since Panetta, former director of the Central Intelligence Agency, succeeded Robert Gates as defense secretary in July.

The defense ministry here has said the two sides will discuss bolstering their defense cooperation against potential North Korean threats and review preparations for the transfer of wartime operational control from the United States to South Korea in 2015.

Panetta is also expected to highlight the importance of the Asia-Pacific region to the United States. He recently said that the United States would not reduce the number of its troops in Asia despite looming cuts to its defense budget.

The presence of some 28,500 U.S. soldiers here is a legacy of the Korean War, which ended in an armistice, not a peace treaty, and leaves the two Koreas technically at war.