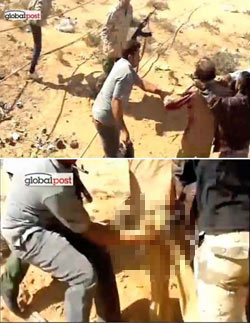 TRIPOLI, Libya - North Korea has banned its citizens in Libya from returning home in an apparent attempt to prevent the popular uprisings in the Arab world from reaching the isolated regime, a source said Wednesday.

The development illustrated the North’s concern about possible social unrest inspired by the Arab Spring, which has also toppled longtime autocratic leaders in Tunisia and Egypt.

Last week, Muammar el-Qaddafi was killed in his hometown of Surt, months after a public revolt began against the former Libyan leader.

North Korea, which maintained close ties with Qaddafi’s regime, has so far been silent on his death. It has yet to officially recognize Libya’s rebel-led National Transitional Council as the North African nation’s legitimate governing authority.

About 200 North Koreans have been left in limbo in the war-torn country by Pyongyang’s order, the source familiar with the issue said.

The North Korean doctors, nurses and construction workers were sent to Libya to earn hard currency for their impoverished communist country.

North Korea has also taken similar steps for its officials in Libya, Egypt and other countries, said the source.

In recent months, North Korean defectors and other South Korean activists have sent leaflets calling for an uprising against North Korean leader Kim Jong-il, who rules the country with an iron fist.

Still, many experts are skeptical about an Arab Spring-style uprising in the isolated country, citing North Korea’s intolerance of dissent and tight control over any information spread within and across the country’s borders.