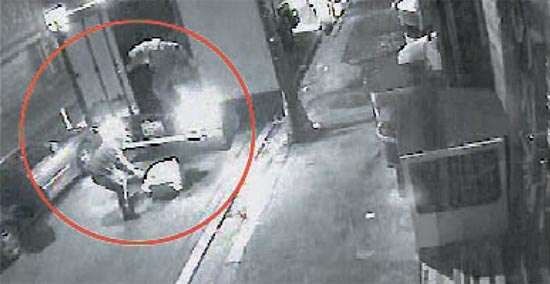 In a swift and carefully planned heist, three thieves armed with metal pipes attacked a cargo truck in South Chungcheong and got away with a bag containing 50 million won ($44,000) in cash.

According to police in Cheonan’s Seobuk District, the truck was making several deliveries, including the bag of cash. At 4:50 a.m. Wednesday, the truck was parked near a fish market in Seongjeong-dong, Cheonan, and the driver delivered some goods nearby. A 41-year-old security guard surnamed Lee was waiting for the driver to return when a black Hyundai Grandeur sedan suddenly parked next to the truck.

Two men raced out of the sedan, opened the cab of the truck and beat Lee with metal pipes until he passed out.

“I couldn’t react to anything,” Lee said, according to the police. “I was waiting for my colleague inside the truck, but two men suddenly broke in and beat me.”

The two thieves then opened the cargo area, snatched the bag of cash and sped off with their driver.

Police said that the heist was obviously planned in advance because it took only 30 seconds.

They assume the thieves knew what the truck was carrying and its delivery schedule and are looking into the likelihood that they had information from an employee of the transport company.

“We suspect that there are more accomplices in this case,” said Yoo Dong-ha, a police investigator. “We will continue to investigate the suspects’ escape route based on the CCTV footage.”