Lions up 2-0 as Wyverns struggle to find offense

Lions up 2-0 as Wyverns struggle to find offense 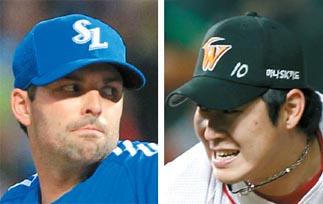 After suffering two consecutive defeats, the Incheon SK Wyverns are hoping to fight back against the Daegu Samsung Lions when the third game of the Korean Series starts at Munhak Baseball Stadium in Incheon tonight.

The Wyverns, who swept the Lions 4-0 in last year’s Korean Series, were in an offensive slump in the first two games in Daegu, collecting only one run while striking out 29 times.

In Game 1, the Wyverns were shut out at 2-0 and in Game 2, the team succeeded in collecting their first run, but lost 2-1.

In Game 2 on Wednesday, the Wyverns’ batters struck out 17 times, 10 of which were at the hands of Lions starter Jang Won-sam, who pitched only five innings. It was a Korean Series record for team strike outs in one game.

Lee Man-soo, the Wyverns interim manager, acknowledged that the reason the team lost the first two games was their weak offense, hoping a day off could revitalize the players’ energy. The Wyverns, who took third in the regular season, played nine postseason games to reach the best-of-seven series.

“It feels bad that our players look tired,” Lee said after the game on Wednesday. “The players need a rest, but if that doesn’t work, we just need to toughen up our mentality.”

Pundits claim that the Wyverns need Park Jung-kwon to step up his game in order to boost the team’s attack in the next two home games. Park, 30, was the pivotal player against the Busan Lotte Giants after belting a pair of two-run homers in Game 5 of the second-round playoff, pushing his club into the Korean Series.

Nicknamed “Mr. October” for his impressive performance in postseason games, Park, however, has so far generated only one RBI single for the team.

While the Wyverns are struggling with their offense, on the other hand, the Lions are confident that their strong bullpen will again seal the victory in Incheon.

For the third game, the Lions manager Ryu Joong-il said that 29-year-old American pitcher Justin Germano is the starter, but will not allow him to pitch more than five innings since they have a pack of solid bullpen pitchers that can take care of rest of the innings.

The Lions have been using their bullpen pitchers effectively so far and benefited when they needed them the most in the game.

The Wyverns announced that they will send Song Eun-beom to the mound for the third game.

Song has been a solid starter for the Wyverns this postseason and had an impressive performance against the Lions in his six encounters in the regular season, collecting two wins and one hold with a 0.73 ERA.