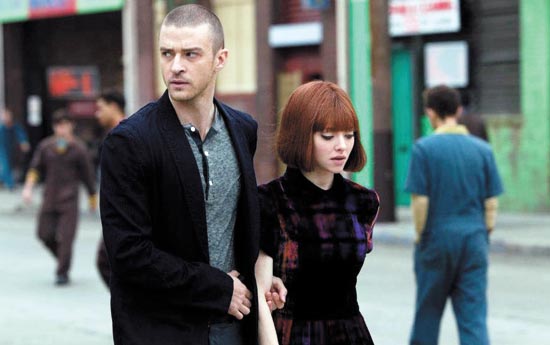 A still from “In Time,” which was released on Thursday at theaters nationwide. Provided by 20th Century Fox


With “In Time,” writer-director Andrew Niccol takes a clever, compelling idea - that time is currency and you can buy your way to immortality or die broke - and beats it into the ground.

For a movie about the importance of maximizing every second, “In Time” ultimately grows repetitive and wears out its welcome. It’s fast-paced and hugely stylish, though, with its great-looking cast and a mix of gleaming, futuristic visuals and grimy, industrial chic. And it’s a welcome return to the kind of slick sci-fi Niccol made his name on in the mid-’90s with “Gattaca” and “The Truman Show” (which he wrote).

But his high-concept premise raises several nagging questions. Why do all the inhabitants of this dystopian world (which happens to look just like downtown Los Angeles and Century City) stop aging at 25, then find themselves with only a year left unless they can buy themselves more? When did this start and what is the purpose? And if Justin Timberlake is so busy working in a factory just so he can afford to live one day to the next, where does he find time to go to the gym?

Yes, among the beautifully photographed images in “In Time” - the work of the great cinematographer Roger Deakins - is a shirtless Timberlake, early and often. He stars as Will Salas, who lives in the ghetto neighborhood of Dayton but dreams of moving to the ritzy New Greenwich with his mother (Olivia Wilde in an amusing bit of casting, since she’s three years younger than Timberlake).

In one of many inspired details, the amount of time you have glows green as it ticks away on your forearm, and you can share what you have - or take it away - by clasping wrists with another person.

When Will can’t stop his mother’s time from running out - and he’s framed for a crime he didn’t commit - he goes on a revenge spree to steal years from the rich and give them back to the poor.

His accomplice is Sylvia Weis (Amanda Seyfried), the beautiful but sheltered daughter of the wealthiest man in town (Vincent Kartheiser), who starts out as his hostage but becomes his enthusiastic partner in crime.

So if you’re keeping track, this is “Logan’s Run” meets “Bonnie and Clyde” meets “Robin Hood.”

Cillian Murphy is on their tail as a “timekeeper,” a sort of cop who runs around enforcing the rampant theft of hours and minutes in his ever-present, distressed leather coat.

Alex Pettyfer is also after them as a pimped-out British gangster (or “Minute Man”) who wants to steal the hundreds of years these two have amassed.

Basically, everyone is gorgeous, has high cheekbones and is fashionably dressed in the future, the last of which is the work of multiple Oscar-winning costume designer Colleen Atwood.

Seyfried’s style would please Anna Wintour - because she happens to look just like the Vogue magazine editor - with her dark red, blunt-cut bob and tailored, feminine designs. The downside of that, though, is that she has to run in heels - a lot. A ridiculous amount, actually. She and Timberlake are cute and playful together, yet lack the kind of intense chemistry that suggests they’d ever be truly dangerous.

But if you can get past the plot holes and the copious time puns - with phrases like “Have you got a minute?” and “You’re taking forever” taking on a whole new meaning - “In Time” is actually rather brisk, enjoyable entertainment. And with its gaping disparity between the haves and the have-nots causing increasing class tension, it also has the added benefit of being relevant.

“In Time,” a 20th Century Fox release, is rated PG-13 for violence, some sexuality and partial nudity, and brief strong language.