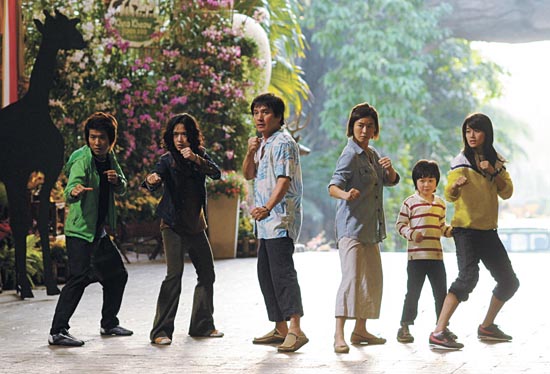 “The Kick,” a Thai-Korean co-production directed by martial arts director Prachya Pinkaew, follows a Korean family that runs a taekwondo gym in Bangkok and must recover Thai treasures stolen by a gang of mobsters. Provided by The Kick Company


Although taekwondo is a popular sport, it has not fared well at the box office and many a taekwondo film has flopped. But Thai martial arts film director Prachya Pinkaew, famous for his “Ong-Bak” films, is hoping his latest film “The Kick” will not follow the footsteps of its predecessors.

The film, a Thai-Korean co-production, features Korean actors and was shot entirely in Thailand with a Thai production crew.

Although Pinkaew has a number of hit, action-packed films under his belt, he said it was a challenge to take the helm of “The Kick,” which revolves around a Korean family who runs a taekwondo gym in Bangkok. The film follows the family as it becomes tasked with the job of recovering national treasures belonging to the Thai royal family that were stolen by a gang of mobsters.

“My first priority was to keep the original beauty of taekwondo and then maximize that with special settings and music,” Pinkaew said after a press screening of the film on Monday.

The 49-year-old director said that his most difficult task was coming up with diverse action choreography because of the limited number of tricks in the taekwondo repertoire. So he resorted to other cinematic techniques.

“In order to emphasize the charms of taekwondo, which has many straight kicks, I put actors in dangerous settings and used music to elevate the tension.” 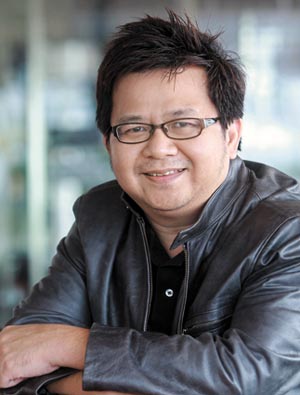 He also brought in taekwondo champion An Chang-bum to create the action choreography.

Pinkaew added that he was “happy to bridge two countries” with this film.

Pinkaew majored in architecture back in college but made a name for himself in cinema with his first film, the 2003 hit “Ong-Bak: Muay Thai Warrior.” The film instantly became the highest-grossing film of the year in Thailand and was also a hit in Korea. It has since developed into a three-part series and has made Pinkaew’s name synonymous with martial art films in and outside of his country.

Pinkaew is based in Thailand but regularly works with multinational production companies. Apart from “The Kick,” Pinkaew recently worked on the American action film “Elephant White,” starring Kevin Bacon.

For his Korean project, Pinkaew said he tried to incorporate more comedic elements than in previous works. To carry the comedy, he said he relied on the film’s star, Korean actress Yeh Ji-won, whose lively personality helped convince Pinkaew to cast her in the role.

“I thought it would be better to add humor and comedy to the film for Korean fans. In that sense, actress Yeh Ji-won was the right person for her role,” he said. “Before the film, I didn’t know much about her but I later realized how funny and full of positive energy she is.”

Moon is played by Cho Jae-hyeon (“Marine Boy,” 2009), who said that Pinkaew encouraged the actors to do their own stunts to make the action more realistic.

“I was scheduled to fly to Bangkok with my stunt double, but Pinkaew encouraged me to do the action scenes by myself,” Cho said. “He told me it would be okay even if I wasn’t good at it.”

“Pinkaew promised that he would make me look cool on screen even if I couldn’t do [the stunts]. But it was his final pitch that moved my heart,” said Yeh. “When he told me that he wanted ‘realistic action’ I had a sudden urge to live up to his expectations.”

To prepare for the film, Yeh studied taekwondo intensively, eventually earning a first dan, or rank.

Along with Cho and Yeh, two rookie actors who are also members of the national taekwondo poomsae (a set sequence of exercises) team played crucial roles in making the film’s action scenes realistic. Tae-mi and Na Tae-ju dazzle in their roles as two of Yoon and Moon’s children, executing with panache everything from 360 degree flying kicks to 720 degree crescent kicks.

Also on board is Mum Jokmok, who appeared in the “Ong-Bak” films, who plays Uncle Mum. Mum also trains at the family gym and provides some moments of comic relief.

“Tae-ju’s actions remind me of those of Jackie Chan, while Tony Jaa’s [star of the “Ong-Bak’ series] actions are similar to those of Bruce Lee,” Pinkaew said. “It’s hard to say who is better than who, but I think Tae-ju does an excellent job of mixing all of these tricks while he’s acting, but Tony has a harder time with it.”

After the press screening, some reviewers criticized the film for a plot they said was somewhat flat, but they also said that the film is enjoyable overall with a smart combination of Korean and Thai actors.

“The Kick” premiered at the 16th Busan International Film Festival earlier this month and its distribution rights have been sold to companies in 36 countries including France, Hong Kong and India. It will be released in Korea on Nov. 3 at theaters nationwide.