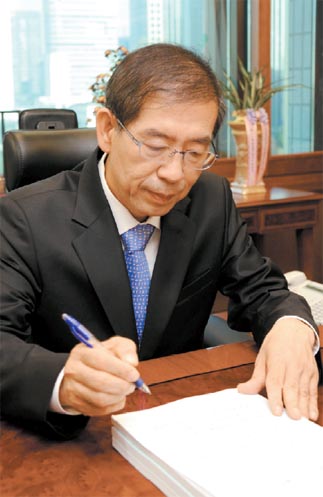 On the first day as Seoul mayor, Park Won-soon signs in the documents to take over mayoral duties yesterday in his office in City Hall. [Joint Press Corps]

A day after his stunning election as Seoul mayor, Park Won-soon approved a bill to offer free school meals to all fifth and sixth graders starting from next month - a program bitterly opposed by predecessor Oh Se-hoon and the issue that led to his resignation.

On the first day in the mayoral office, Park signed a bill yesterday approving the funding of 18.5 billion won ($16.5 million) to the city’s education office for about 197,000 fifth and sixth graders in the city.

From next year, the new mayor said he will steadily expand the program to middle schools.

Since December 2010, students between first and fourth grades have received free school lunches, funded by the Seoul Education Office and local district offices. Oh resisted an expansion of the free meal program and called a referendum on the issue in August. Not enough Seoul residents voted to make the referendum valid, and Oh resigned.

Asked why he chose that bill as the first thing to do as mayor, Park told reporters yesterday, “Free school meals were the cause of the end of the former mayor’s administration, so I thought I had to resolve that issue first. And it was the first pledge I made, so I felt it should be implemented instantly.”

As the mayor’s post was vacant, Park assumed the office as soon as he won the election. The date of his inauguration ceremony hasn’t been decided yet. Park will finish the uncompleted portion of Oh’s term through June 2014.

When it comes to Oh’s controversial Han River Renaissance Project and whether he will roll it back, Park told reporters, “I can’t make a unilateral decision on it. Through the joint governance committee, I will gather opinions from experts, working-level officials and citizens.”

Park, who has no party affiliation, promised such a committee to get support during his campaign from liberal parties. He said he would be its chair and two liberal politicians, Representative Park Young-sun, a Democratic Party lawmaker who challenged him in the Seoul mayoral primary, and Choi Gyu-youb of Democratic Labor Party will be members.

“The ruling Grand National Party suspected that the joint governance committee will ruin the autonomy of the city government’s administration, but the committee is just advisory,” Park said. “I think a government organization can’t solve social problems by itself.

“The reason [for Oh’s resignation] was also due to a lack of communication,” Park said. “I will manage the city’s administration based on rationality and common sense.”

The mayor of Seoul has significant power, and he is often referred to as a “mini-president” because he is the administrative leader of a capital city with 10.57 million residents. Last year alone, the Seoul Metropolitan City’s budget was more than 20.61 trillion won and 16,228 public servants were working for the city. Including the district offices and city-invested offices, 66,142 civil servants are under the mayor’s leadership.