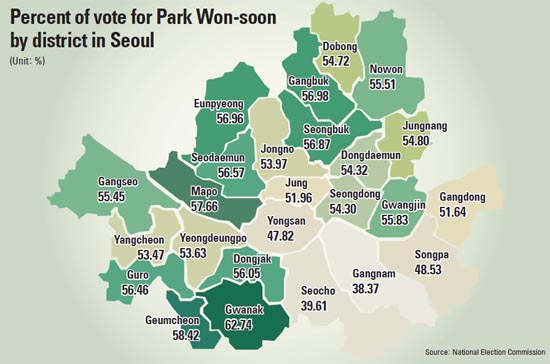 At the time, they said they were swayed by his neutral image from the political infighting and by their belief that he’d focus on people’s livelihoods.

In interviews, young Park voters said they had become disillusioned with Lee’s leadership and felt that the president and the ruling party had failed to deliver on their promises to focus on the lives of average citizens.

Many said they believed that the president simply didn’t care about ordinary people. Instead, Park’s young supporters said they felt that Lee only cared about people who shared common ground with him, in education, religion and hometown: they called them “Ko-So-Yeong” - those who graduated from Korea University (Lee’s alma mater), attend Somang Church (where he worships) and hail from the Yeongnam region (the president’s home region).

Recent reports of Lee’s purchase of a large plot of land in southern Seoul under his son’s name for his retirement home also fueled their anger, they said.

“I voted for Lee in 2007 because I thought he could be a president for the economy. But now I feel he has too much to hide,” said Kim Min-heok, 26, a university student.

Jeon Gwang-su, 27, a faculty member at Soongsil University, said he voted for Park because he had come to distrust the political parties.

“I hate the GNP because it failed on economic policies and worsened the people’s livelihoods,” Jeon said.

Kim So-yeong, 38, a wedding consultant, said, “In 2007, I was pregnant and Lee pledged to encourage births, so I chose him. But now, I feel betrayed because the support for mothers is different in each district. I also believed that he would help the economy since he was a successful businessman. But things got worse.”

Some said that Na’s upper-crust image had made them distrust her.

“I can’t trust Na because she had a totally different life from Park’s,” said Lee Jong-sun, 46, a homemaker from Majang-dong, eastern Seoul. “Park looks like he has struggled to help people by running a charity, but Na looks like she’s grown up in a rich environment without feeling any difficulties based on her clothes and face.”

She added, “She got more votes only in wealthy districts in Gangnam, confirming my thoughts. Na should have pondered how she could have gotten votes from poorer citizens.”

Park Jun-seok, a student at Seoul National University, said, “I don’t think a person who spends 100 million won [$90,000] per year on her skin can understand the lives of people who suffer from 10 million won tuition fees.”

The interviewed voters said they hoped Park would focus on helping ordinary citizens and keep away from political and ideological debates.

“Former Mayor Oh carried out policies for display only,” said Park Yang-il, 27, who works at a marketing company. “I hope Park implements practical, helpful policies for the happiness of Seoul citizens.”

Kim Yeong-ju, 26, who works at a conglomerate, said, “I think lowering taxes and stabilizing prices should be the priority for the mayor.”

Gang Seong-seok, 37, from Sillim-dong in western Seoul, said, “I want Park to focus on welfare in education, such as subsidizing hagwon costs, and implementing policies to protect small- and mid-size companies.”