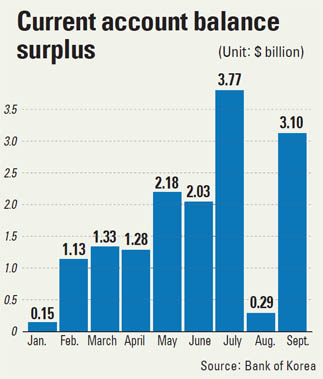 Contrary to the widely held suspicion that Korea’s export market is winding down, statistics released yesterday by the central bank showed that outbound shipments are maintaining solid growth.

But concerns persist as last month’s current account surplus was largely fed by shrinking imports of capital goods. And the central bank noted that such trends may negatively affect future growth.

According to the Bank of Korea, the current account balance posted a $3.1 billion surplus in September, a significant improvement from the $290 million surplus recorded in August. The balance has been in the black for 19 months.

“The results for September were much better than expected,” said Kim Young-bae, head of the BOK’s statistics office.

Kim said exports improved dramatically on the back of brisk sales of automobiles, steel products and petroleum goods.

Total exports in September rose 21.1 percent from the previous year to $47.5 billion. In August exports were lower at $45.6 billion.

The report was announced against the backdrop of an improving U.S. economy, which posted a significant expansion in the third quarter.

The U.S. government said its economy grew 2.5 percent on-year, a stiff increase from its meager 1.3 percent growth in Q2.

“We expect exports this month to continue this positive momentum, and the current account balance could be similar to September or it could be more,” Kim said.

But unlike exports, which grew from August, imports inched down after hitting $45.3 billion that month.

With imports dropping slightly, the balance of goods stood at $2.4 billion in September, a whopping increase from $370 million in August.

Imports of capital goods in September rose by 4.5 percent on-year to nearly $12 billion. This was much lower than their annual growth of 14.1 percent in August, when the amount stood at $13.5 billion.

A drop in imports of these goods indicates that companies are spending less or holding back on expanding their production lines.

“This deceleration .?.?. indicates that companies are postponing or downsizing their investments in facilities due to fears stoked by the European debt crisis,” said Kim.

“The expansion of the current account balance, due in part to the shrinkage of capital goods, could limit the future growth of the economy and is therefore undesirable,” he said.

Exports got a boost in September as they benefited from the sharp depreciation of the Korean won.

Triggered by external uncertainties in the euro zone, among other factors, the Korean currency plummeted 9.4 percent last month against the greenback, presenting a risk to importers as their outlays shoot up.

The yen has also reached new highs against the dollar, giving Korean exports more of a competitive edge in pricing against their Japanese rivals.

“[The depreciation of the won against the dollar] could have been partly responsible for the boost in exports, but I wouldn’t read too much into that,” said Kim of the BOK.

However, as financial markets around the world are rapidly stabilizing after protracted euro zone jitters, and the won is settling back at the 1,100-to-the-dollar level after fluttering around the 1,200 mark earlier, exporters may see their gains from the depreciating currency draw to a close.

Meanwhile, even the private sector was pleasantly surprised at the news of the current account balance.

“[It] was much higher than expected last month,” said Lee Tae-hwan, a senior analyst at the Samsung Economic Research Institute.

“But we have to proceed cautiously because the currency exchange benefits are temporary and once the won stabilizes, the situation [of favorable exports] could change for the worse.”

Kim Choong-soo, governor of the central bank, projected at a recent economic forum that Korea will see modest growth next year similar to that of this year’s, below 4.5 percent.

He said the nation’s current account surplus will likely shrink as Korea’s exports continue to slide.