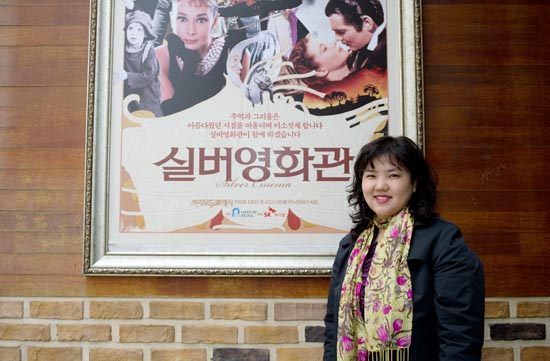 
The capital city has its fair share of film festivals, but the Silver Theater’s “100 Days Film Festival” is different. Like the venue housing the screenings, the festival caters to senior citizens.

The festival, which continues until Feb. 9, will show more than 15 classic movie masterpieces, such as “Un Homme et Une Femme” (“A Man and A Woman,” 1966) and “Doctor Zhivago” (1965). It is the first festival organized by the Silver Theater, the only movie theater in Seoul for the senior set.

The theater, now on the cusp of its third anniversary, has attracted up to 300,000 moviegoers since its founding in January 2009.

Kim Eun-joo, the Silver Theater president, was busy on a recent Monday afternoon with preparations for the festival, which she says echoes the theater’s mission.

“The silver generation isn’t seeking trendy films, but classic movies that rekindle their memories of the old days,” she said. “This place gives them a cultural space of their own, one that reminds them of home.”

Kim’s family founded the theater, located in Nakwon Arcade, central Seoul, after the end of its run as the Hollywood Theater. The Hollywood was popular with hip young people until the multiplexes left its seats empty. These days, however, the theater is brimming with life once again.

After the Monday afternoon screening, more than a hundred seniors came streaming out of the theater and into the daylight. Upon noticing Kim, some offered gifts of rice cakes while others offered their thanks for a job well done.

“We are so thankful that you’ve done such a good thing for us seniors,” said one moviegoer who declined to be identified.

To advertise the festival, Kim recruited 14 volunteers, all of them senior citizens, to pass out flyers around the neighborhood.

“For these types of movies to be advertised to the right audience, the Internet or other high-tech media will not work,” Kim said with a smile. “Seniors usually see newspapers or flyers on the street, so this is the most effective means of getting the word out.”

Every Monday during the festival there will also be a “7080 Generation” concert, offering members of the senior set a chance to display their talents.

At 2,000 won ($1.80) per ticket, Kim said it is a struggle to keep the theater open, but the service the theater provides is invaluable to its patrons. The theater generates a mere 10 million won from ticket sales but is subsidized by corporations such as SK Chemical and the Seoul city government.

“If you think only in terms of finances, we should up the price or shut down, but for the senior folks who are movie fans we ought to keep it open 365 days per year,” Kim said.