After Seoul loss, GNP pulls back on FTA approval

After Seoul loss, GNP pulls back on FTA approval 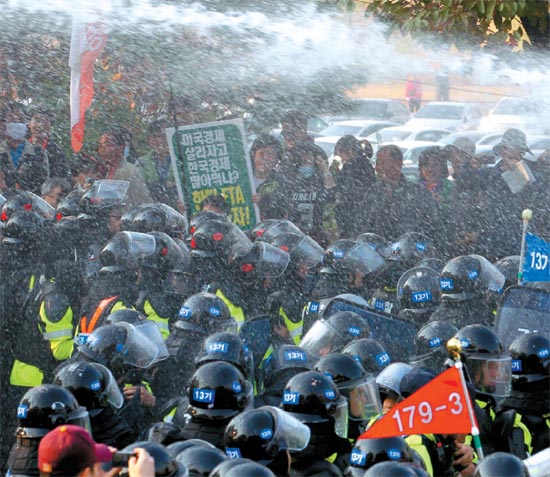 As farmers and students try to storm into the National Assembly to protest the possible ratification of the free trade agreement with the United States, riot policemen hold them back by shooting a water cannon in front of the legislature in Yeouido yesterday. [YONHAP]


The Grand National Party’s defeat in the Seoul mayoral by-election has scared the party off from pushing through the Korea-U.S. free trade agreement, and its ratification is more imperiled now than ever.

Emboldened by their win in the by-election, the liberal opposition has become even more steadfast in resisting the agreement, which they say will hurt farmers and small Korean businesses. Democratic Party Chairman Sohn Hak-kyu proposed yesterday the ratification should be delayed until after the results of next April’s general election are known.

Although the Grand Nationals and the Lee Myung-bak administration wanted the FTA to be ratified at a main session of the National Assembly yesterday so it could take effect on Jan. 1, 2012, the liberal opposition parties fiercely disagreed.

The session opened around 3:40 p.m. after a delay caused by a meeting of ruling and opposition parties to discuss the FTA. The free trade deal, approved by the U.S. Congress earlier this month, is currently pending at the Foreign, Trade and Unification Affairs Committee. No committee meeting was scheduled for yesterday to approve the ratification motion and send it to the main session, so the floor vote did not take place.

The GNP says it wants the ratification to be done in early November. The next main session is scheduled for Nov. 3. The GNP has the majority in the legislature, enough to approve the deal alone. But five liberal opposition parties including the Democratic Party and the Democratic Labor Party agreed to join hands to fight a railroading of the bill by the GNP ? including the use of physical force.

In Korea, the minority in the assembly resorts to physical brawls when the majority party tries to railroad through bills, using violence as a kind of filibuster. But the brawls are unpopular with the public, which blames the majority party for not trying hard enough to compromise with the opposition.

After losing the mayoral by-election this week, GNP lawmakers are much too fearful of losing their seats in next April’s general election to be seen in a brawl over the FTA.

The DP continued to insist on removing “toxic” clauses from the deal. The Democrats yesterday decided to focus on removing an investor-state dispute settlement provision in the agreement instead of making a wide range of demands.

The ISD provision will grant the right to a foreign investor to bring a dispute in Korea to an international panel, rather than seeking a resolution here. The Democrats said the provision would make small companies and retailers in Korea more vulnerable.

The GNP yesterday reminded the DP that the provision was put in by the liberal Roh Moo-hyun administration in 2007, not added by the conservative Lee government. GNP floor leader Hwang Woo-yea said similar provisions are in 81 of 85 trade pacts.

DP Chairman Sohn Hak-kyu demanded a significant delay in the FTA vote, linking it with the outcome of April’s legislative election.

“Let’s ask the people their opinion of the FTA at the general election and get their judgment,” he said. “Once the public makes a decision, the next National Assembly should handle it.”

A new TV advertisement created by the Lee administration to urge the ratification also enraged the liberals because it used the voice of the late former President Roh to promote the trade deal.

The 40-second-long ad began with Roh’s voice saying, “My fellow Koreans, it is negotiated only for the sake of economic gains.” A voiceover says, “The Korea-U.S. FTA, started by President Roh Moo-hyun, will be concluded by President Lee Myung-bak.”

The liberals immediately demanded the ad to be pulled.