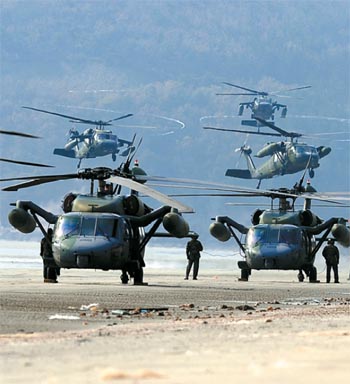 Attack helicopters maneuver yesterday on Baengnyeong Island in the first large-scale joint defense drill since the foundation of the Northwest Islands Defense Command in June. [YONHAP]

In a clear message to Pyongyang, the defense chiefs of South Korea and the United States agreed to complete a new joint operational plan to counter any North Korean military provocations before the end of this year and to develop a tailored deterrence strategy to better counter the North’s nuclear and missile threats.

South Korean Minister of National Defense Kim Kwan-jin and U.S. Secretary of Defense Leon Panetta met yesterday for an annual Security Consultative Meeting in Seoul to discuss a wide range of issues concerning the Korean Peninsula. The meeting was the 43rd of its kind and a joint communique was released on the talks.

In yesterday’s talks, the two sides not only addressed aggressions by the North using conventional weapons but also its nuclear arms programs.

“The North Korean nuclear situation constitutes a serious threat to world peace as well as to security on the Korean Peninsula and in Northeast Asia,” Kim and Panetta said in the joint communique. They also “underscored that North Korea’s uranium enrichment program [UEP], revealed last November, poses a grave threat as this program allows North Korea a second path to nuclear weapons development and increases the potential for onward proliferation of fissile material and sensitive technologies to other parties.”

The two leaders endorsed a multi-year work plan for the Extended Deterrence Policy Committee and “decided to develop a tailored bilateral deterrence strategy” to enhance deterrence options against nuclear threats or from other weapons of mass destruction.

The two leaders also discussed the escalated tensions on the Korean Peninsula following the North’s two deadly attacks last year and agreed to continue combined exercises to demonstrate the alliance’s readiness, reaffirming that “any North Korean aggression or provocation is not to be tolerated.”

“They perceived the increase of asymmetric military threats, such as North Korean nuclear weapons and ballistic missile developments, as a serious threat to global peace as well as the security of the Korean Peninsula and Northeast Asia,” the joint communique said, adding that the two countries will further develop deterrent capability, led by the South and supported by the United States.

A senior-level policy consultative channel, the Korea-U.S. Integrated Defense Dialogue, will be established as “an umbrella framework that encompasses various defense dialogue mechanisms” between the two countries “to ensure high-level political oversight and synchronization of Alliance objectives.”

“The minister and the secretary also thought highly of the development of the ROK-U.S. Counter-Provocation Plan, which prepares for potential provocations by North Korea,” the communique said. The plan will be completed before the end of this year, Kim said at a press conference yesterday following the talks. “It is an expression of the South’s and the U.S.’s determination to retaliate to any armed provocation by the North,” he said.

Kim also said the United States had agreed immediately to send “an overwhelming number of forces” in times of emergency in the South. The number of U.S. troops in South Korea will remain unchanged to demonstrate Washington’s commitment to defend the South and joint military drills on the peninsula, including the northwestern islands, will be strengthened, Kim added. As of now, 28,500 American troops are stationed in the South.

At the press conference, Panetta said the Pentagon will keep the number of U.S. troops at the current level, despite budget difficulties in the U.S.

He also said immediate retaliation to an attack will be made by South Korean troops, while all available capabilities of the South and the United States will be used when the time comes for a joint action.

Kim said there is a possibility of further provocations during the course of Pyongyang’s third-generational leadership succession.

According to the communique, the South Korean and U.S. military leaders “decided to increase the combined watch activities on the North Korea situation in order to ensure the success of the Nuclear Security Summit to be held in Seoul next March.”

The South and the United States also urged the North to respect the Northern Limit Line, the de facto maritime border in the waters west of the peninsula, stressing that it “has been an effective means of separating ROK and North Korean military forces and preventing military tension for 58 years.”

The South’s military carried out a drill near the western inter-Korean border.