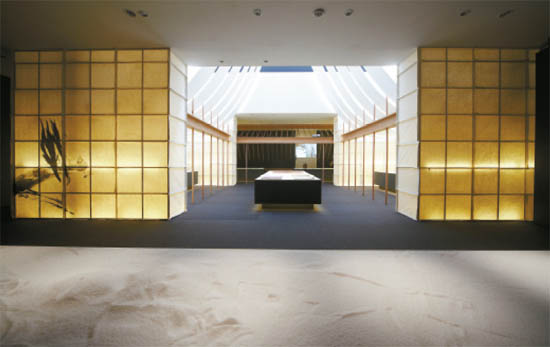 “The Garden of Imaginative Tales” exhibition kicked off on Friday at Beyond Museum in Cheongdam-dong, southern Seoul. Provided by AmorePacific


Traditional Korean handcrafts may still fascinate Westerners with their exotic beauty and sophistication. But the sad reality is that the majority of the master artisans behind these works, who have been honing their skills for decades, are struggling amid declining local appreciation of their craftsmanship.

Beyond Museum in Cheongdam-dong, southern Seoul, aims to draw attention to the work of 11 such artists with its latest exhibition, “The Garden of Imaginative Tales,” which launched last Friday.

The exhibition is being sponsored by Amore Pacific, the nation’s top cosmetics manufacturer, which is one of a few Korean enterprises taking steps to help refocus public attention on traditional artworks as part of its corporate sponsorship of cultural activities. Its flagship brand Sulwhasoo, renowned for using ingredients from Eastern herbs, has sponsored an exhibition featuring traditional artworks every year since 2007.

Exhibition curator Kim Paik-sun emphasized the importance of bringing recognition to the work of these artisans.

“Of course these artisans are masters of their craft,” Kim said. “But I wish visitors could find greater value in their life’s work in addition to their skills.”

That was a sentiment echoed by participating artist Jang Yong-hoon, a hanji, or traditional Korean paper, artisan who is recognized as Intangible Cultural Property No. 117. Jang has worked to produce the traditional paper for the past 63 years, an extensive process that involves steaming, soaking, drying, peeling and beating mulberry bark.

“When everyone appreciates and recognizes you, life is easy,” Jang said. “But sticking to tradition when no one appreciates it is a different matter. Our craftsmanship couldn’t have lasted if it had not been for our ancestors, who had the perseverance to tolerate poor treatment.”

The theme of the exhibition is based on the belief that culture is an organic composite with no boundaries of genre, the curator Kim said.

The expertise of the 11 featured artisans ranges from sea salt to hanji, ornamental knives, pottery, maedeup (traditional ornamental knots), lacquer painting and metalwork. Some of the works have been placed on a table covered with beautiful ivory-colored hanji, while others are installed on the walls or suspended from the ceiling.

One of the notable participating artisans is Park Seong-chun, who produces topanyeom, or gray salt, which is mined from wetland soil and dried under the sun using traditional methods. His installation consists of a long bed of sea salt and visitors are invited to touch and taste the material.

Park is one of five topanyeom producers designated as artisans by the Ministry for Food, Agriculture, Forestry and Fisheries, and the Cultural Heritage Administration. The two government bodies have created the designation because of the highly sophisticated procedure required to purge impurities and enhance the minerals and flavor in sea salt.

Some 818 from Shinan County in South Jeolla have applied for the designation; those who receive it will also become eligible for local government subsidies. Shinan’s salt flats are globally recognized.

The exhibition runs through Nov. 10 and admission is free. For more information visit www.beyondmuseum.com or call (02) 794-1558.