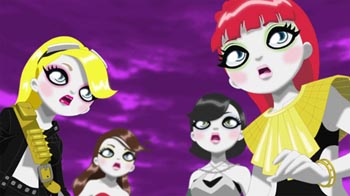 The producer of the music video for 2NE1’s hit single “Hate You” said that she had no intention of mocking the nuclear damage in Fukushima, Japan, but was trying to highlight the pain that the incident inflicted on humanity.

The video, which was released in early August, became the center of controversy after some Japanese fans said it contained anti-Japanese sentiments.

Those who were critical of the animated video, which shows four women saving the world from a monster, claimed that a scene depicting a nuclear plant explosion was a reference to the Fukushima Daiichi nuclear disaster in March and that the monster, which has a red dot on its head, represented the national flag of Japan.

But Marie Kim, the pop graphic artist who produced the video, said yesterday that fans are characterizing the video incorrectly.

“I’m really sad that there are still some Japanese fans who believe the video makes fun of the accident,” Kim said. “I believe this controversy will empower 2NE1 to deliver a message of hope and love to the world.”

Meanwhile, 2NE1’s management agency, YG Entertainment, said that it canceled the group’s concert “Nolza in Bangkok” due to the flooding in the Thai capital. The group was originally scheduled to perform on Saturday.