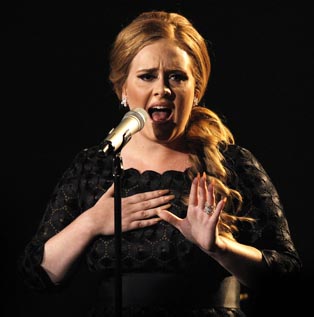 NEW YORK - British singer-songwriter Adele has been forced by impending surgery to cancel all her remaining tour dates and promotional appearances through the end of the year, her record label said on Friday.

Columbia Records said in a statement that Adele, 23, was canceling the appearances with “deep regret.” “She is to undergo surgery to alleviate the current issues with her throat and a full recovery is expected. As a result, doctors have ordered her to rest her voice and completely recuperate” before resuming work commitments, the statement said.

Earlier this month the Grammy-winning singer pulled out of 10 U.S. dates on the back of her hit album “21,” which has produced hits such as “Rolling in the Deep” and “Someone Like You.”

“21” is the best-selling album of the year in the United States.

On Friday, she canceled her remaining British dates.

Adele was forced to postpone several U.S. dates earlier this year due to vocal-chord issues and was finishing a tour in Britain when problems reappeared in early October.

She topped the American Music Awards nominations on Oct. 11, edging out Katy Perry and Lady Gaga with four nods.