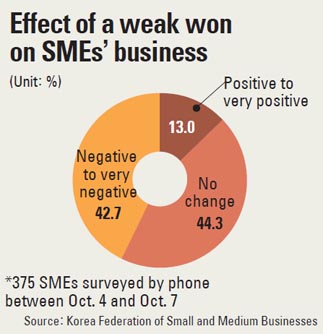 The CEO of a small paint and ink manufacturing company in Anyang, Gyeonggi surnamed Jung gained a new obsession this month - looking up the won-dollar exchange rate every chance he had.

The company imports 100 percent of its crucial oil-based raw material in dollars - although inventory is rapidly running out, the lurching value of the won made it nearly impossible for Jung to time the purchase without considerable losses.

“Last time I bought the raw material was in early August, when the exchange rate was 1,070 won per dollar,” he said. “Since then, the value of the won fell by more than 100 won [in mid-October] against the dollar; if I bought the supplies then I would lose 10 percent of my margins in one sitting.”

As the won’s value against the dollar continues to fluctuate rapidly, Korea’s small and midsized enterprises (SMEs) importing raw materials or end products from abroad have been exposed to currency exchange risks without buffers.

“In the case of SMEs, most buy raw materials with dollars then get paid in won when they sell their products,” said Choi Hyun-jae, a small-cap analyst at Tong Yang Securities. “They therefore bear the brunt of the burden of a weak won.”

According to a survey released earlier this month by the largest SME trade group Korea Federation of Small and Medium Businesses (Kbiz), some 42.7 percent of responding SMEs said the weak won had a negative effect on their profits, much higher than the 13.1 percent that answered the weak won benefited their profits. Some 375 SMEs were surveyed between Oct. 4 and Oct. 7 by phone.

The won’s value did strengthen against the dollar to reach 1,104 won at Friday’s market close according to Korea Exchange Bank, which is closer than it has gotten this October to the 1,088.8 won surveyed SMEs said was the optimal won-dollar exchange rate for their businesses.

“The overt volatility of the won, more than the won’s relative value against the dollar, is the biggest cause for anxiety,” said the CEO of a midsized steel manufacturer in Busan worth 50 billion won ($45 million) in annual revenue. “The movement of the won’s value determines several billion won in profits, so it’s hard to plan the size of our inventory or production volume.”

In fact, the won has been one of the most volatile currencies in the world. According to the Bank of Korea, during the height of the recent financial turmoil between Sept. 1 and Sept. 27, the won’s volatility was fourth-highest among all currencies - only ranking behind the South African rand, the Brazilian real and the Mexican peso.

A further problem is the fact that SMEs are mostly defenseless against such FX risks. “For SMEs, measures such as diversifying their import partners or currency hedging are mostly out of reach,” said Kim Tae-hwan, head of trade promotion at Kbiz.

This is exacerbated by the fact that local SMEs no longer trust complex currency hedging products due to the fatal losses many received from so-called KIKO (knock-in, knock-out) contracts. KIKO contracts, which allow a company to sell dollars at a fixed won-to-dollar rate if the exchange rate stays within the range fixed in the contract, served as the mass grave of many SMEs that bought into such contracts as the won weakened against the dollar beyond the contracts’ range during the 2008 global financial crisis.

“We’re uneasy about contracts with complex structures such as KIKO, and there are few other options to avoid exchange risks,” said an official at a mobile phone parts manufacturer based in South Chungcheong.

Besides fundamental government measures to stabilize the won’s value, experts suggested that conglomerates could play a part in cutting the burden on SMEs.

“Large corporations see a rise in raw material prices as reason to expand payment [to its suppliers] but rarely reflect the weakening value of the won in their payments,” said Kim Young-geun, head of investment analysis at KTB Investment & Securities.

Meanwhile, analysts said that the won-dollar exchange rate is expected to continue its rocky path in the near future depending on external circumstances - like the euro zone crisis.

“Now, the market’s attention will be whether the won will continue to strengthen,” said Oh Suk-tae, head of research at SC First Bank Korea. “The won is expected to stay firm around 1,100 won per dollar.”