In a series to remember, Cards win 11th championship

In a series to remember, Cards win 11th championship 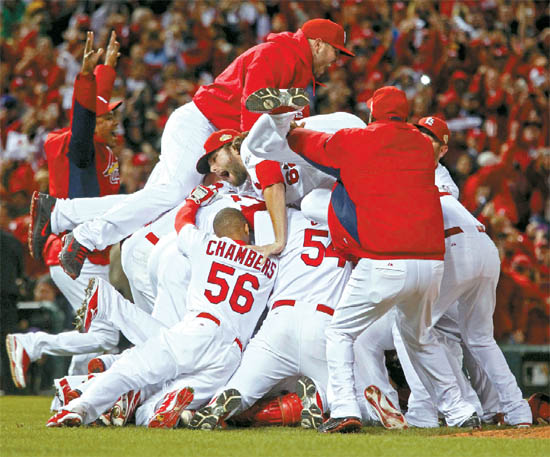 Members of the St. Louis Cardinals celebrate their win over the Texas Rangers in MLB’s World Series championship in St. Louis on Friday. The Cardinals beat the Rangers 6-2 in Game Seven and clinched their 11th World Series title. [REUTERS/YONHAP]


ST. LOUIS - With no NBA team in town and an NFL club mired in last place in the standings, St. Louis sports fans can once again hang their hats on their storied Cardinals baseball franchise.

The Cardinals proved themselves in the 2011 post-season to be a resilient group that became quite comfortable playing with their backs to the wall.

They finished off the Texas Rangers 6-2 in Game Seven of the World Series on Friday at home, having fought back from 3-2 down in the series.

“This is definitely a dream come true,” said World Series MVP David Freese, who grew up a Cardinals fan.

“This whole ride - this team deserves it. This organization is top-notch and we have the best fans in baseball.”

The Cardinals’ two improbable runs to World Series titles in the past six years have given the franchise 11 championships. Only the iconic New York Yankees have more Major League Baseball titles with 27.

As tens of thousands of fans stood outside Busch Stadium watching Friday’s decisive game on a giant video screen or portable satellite hook-ups, the gates opened in the ninth inning and fans from outside streamed into the stadium and joined in the celebration.

“The numbers don’t matter, the records don’t matter, the money you make doesn’t matter. What matters is to raise that trophy and to be able to bring that smile to the city of St. Louis,” said Cardinals first baseman Albert Pujols, who can become a free agent now that the season is over.

St. Louis has not had an NBA team since 1968, when owner Ben Kerner sold the Hawks to two Georgia businessmen who moved the club to Atlanta.

The NFL St. Louis Rams, meanwhile, are off to an 0-6 start, giving them the worst record in the league.

The NHL Blues are off to a 5-5 start to the season. The Blues have gone longer than any other team in the league without making it to the finals and have never won the Stanley Cup in their 44 years of existence.

City officials plan to hold a victory parade on Sunday through downtown and ending at Busch Stadium.

Many baseball experts wrote the Cardinals off in February when their star pitcher Adam Wainwright underwent reconstructive elbow surgery.

They also looked out of it on Aug. 25 when they trailed the Atlanta Braves by 10 and one-half games for the National League wildcard.

But Atlanta’s stunning collapse, combined with St. Louis’ late-season charge, had the Cardinals feeling confident and loose heading into the post-season.

“I still can’t believe we actually did this,” Freese said.

“I keep thinking about mid-August, the mood of this team and the disappointment of what was going down.”

The Cardinals become just the fifth wildcard team to win the World Series, and the first in seven years.

The biggest task for management over the next few months is to try and re-sign Pujols, who can test the free-agent market.