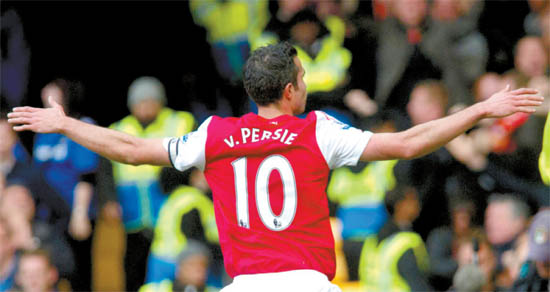 
LONDON - Manchester City stayed five points ahead of Manchester United at the top of the Premier League on Saturday, while Chelsea lost ground on the leaders with a 5-3 defeat against visiting Arsenal.

City overcame a second-half red card for Vincent Kompany to beat the Wolverhampton Wanderers 3-1, while defending champion United won 1-0 at Everton. But the most notable result was at Stamford Bridge, where Robin van Persie scored a hat trick for the visiting Gunners.

Andre Santos and Theo Walcott got Arsenal’s other goals as their club recorded its best win at Chelsea since 1934.

“You could see how happy we are at the end because we fought hard and every one of us showed character,’’ van Persie said. “It’s a big, big win for us today.’’

Frank Lampard put Chelsea ahead in the 14th minute and van Persie equalized 22 minutes later. John Terry restored the Blues’ lead before halftime, but Andre Santos replied in the 49th and Walcott put Arsenal ahead.

Juan Mata equalized with 10 minutes remaining with a swerving shot from outside the area but a poor pass by Florent Malouda combined with a slip from Terry allowed van Persie to round goalkeeper Petr Cech and roll the ball in unchallenged.

The Dutchman then rounded off a swift counterattack in the final minute to complete his hat trick and secure Arsenal’s best win at Chelsea since a 5-2 victory in 1934.

After losing three of its first five Premier League games this season, Arsenal has now won three in a row.

A week after dismantling United 6-1 to take charge of the division, City went ahead early in the second half against a side it beat 5-2 in midweek League Cup action.

Wolves goalkeeper Wayne Hennessey excelled in the first half but failed to deal with a simple back pass in the 52nd. Sergio Aguero challenged him and the ball spun out to Edin Dzeko, who lifted it into the net for a fifth goal izn three games.

Hennessey then parried David Silva’s 67th-minute shot from the edge of the box into the path of defender Aleksandar Kolarov, who tucked away an easy finish.

City was cruising but was reduced to 10 men when Joe Hart spilled a shot from Adlene Guedioura and Kompany was adjudged to have impeded Kevin Doyle as the forward attempted to get to the rebound. Kompany was shown a straight red card and Stephen Hunt scored from a penalty kick.

Wolves pressed for an equalizer but the home side prevailed when Adam Johnson collected Yaya Toure’s pass and fired in.

“I don’t know how many chances we had in the first half today, but their goalkeeper saved everything,’’ City manager Roberto Mancini said. “After the Manchester United win, I don’t want us to think that every game will be easy. This does not exist in football.’’

While City stayed ahead of Manchester United, Wolves are now winless in eight league games.

United moved on from its derby humiliation against City with a hard-fought 1-0 win at Everton, with Javier Hernandez’s close-range finish in the 19th enough to earn the defending champions their first victory at Goodison Park since 2007.

“It’s an important result to come away from home and win,’’ Sir Alex Ferguson said. “It was what we wanted and we battled hard for this.”

The Manchester United manager’s decision to make wholesale changes paid off, with the recalled Hernandez scoring the early winner. The Mexico international finished off a well-worked four-man move to tap in his fourth goal of the season.