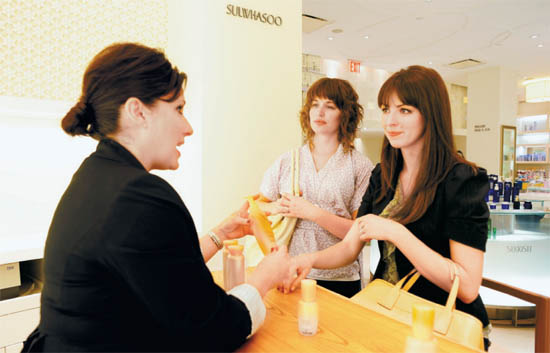 An Amore Pacific sales clerk explains Sulwhasoo products to customers at a Sulwhasoo store in the Bergdorf Goodman department store in New York in 2010.


Amore Pacific, Korea’s largest cosmetics company, has been a pioneer in the Korean cosmetics industry. It was the first company in Korea to establish cosmetics research and development centers in 1954.

Industry sources said the sales system was a vital factor in keeping the world’s cosmetics giants such as L’Oreal, Estee Lauder and Shiseido from dominating the Korean cosmetics market. 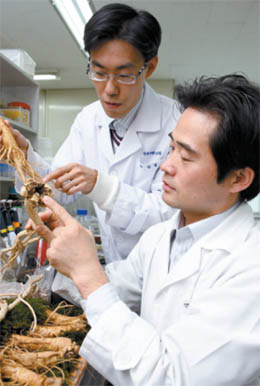 Researchers examine ginseng, which is one of the main ingredients for Sulwhsoo. Provided by the company

Amore Pacific was also the first company in Korea to open a new genre of cosmetics by launching an herbal line cosmetics brand of Sulwhasoo in 1997. “Sulwhasoo” means beauty comparable to a winter tree covered in snowflakes.

“When Sulwhasoo was first released, market watchers were skeptical about its success,” Lee Yoon-ah, a public relations officer at Amore Pacific, told the Korea JoongAng Daily. “It was something that was never tried by other cosmetics brands. Some critics said the Sulwhasoo brand would collapse because there’s prejudice that cosmetics goods should have Western values given that cosmetics products originated from Western countries. Overturning such skepticism, Sulwhasoo broke a long-held perception in Korea that cosmetics products should contain Western values and ingredients to lure customers.”

Lee said sales of the herbal cosmetics line have been on the upswing ever since its release. Sulwhasoo last year alone raised 690 billion won ($625 million) in sales, a more than 54-fold increase from the 12.7 billion won raised in 1997 when the brand began, according to Lee.

In 2004, Amore Pacific set its corporate mission to become the “Asian beauty creator” in the global cosmetics market and envisioned it becoming one of the world’s top 10 cosmetics companies by 2015. In 2010, Amore Pacific was ranked the world’s 16th-largest cosmetics brand by Women’s Wear Daily, a fashion-industry trade journal. Globalizing Sulwhasoo has been one of the company’s top priorities since the 2000s.

In 2004, Sulwhasoo entered the Hong Kong market, a highly competitive market for Western premium brands. In 2009, a Sulwhasoo Spa was opened on Canton Road in Hong Kong to target beauty-conscious consumers and Hong Kong celebrities.

Although Sulwhasoo is a relatively young player in the Chinese and U.S. markets, Amore Pacific said Sulwhasoo’s sales in Hong Kong grew by over 40 percent every year.

The Sulwhasoo brand was officially launched in Korea in 1997, yet its history dates back to 1967 when Amore Pacific cosmetics researchers began research on creating herbal medicinal cosmetics made from ginseng.

In 1972, Amore Pacific obtained a patent for the extract of effective ingredients from ginseng. The following year the company released its first outcome of the five-year research, Ginseng Sammi, the first cosmetics containing ginseng in Korea.

“Sulwhasoo is more than just a product,” said Suh Kyung-bae, CEO of Amore Pacific. “The brand encompasses Asian culture and values, and furthermore represents the 50 years of history and pride Amore Pacific possesses in herbal medicine. Suh Sung-hwan, the founder of Amore Pacific, had a strong belief that ginseng, which has health benefits when eaten, is also good when it’s directly applied to skin. Ginseng Sammi was the first product in 1973. Sulwha came out in 1987 by combining ginseng with other oriental medicine. In 1997, Sulwhasoo that consists of various kinds of cosmetics using oriental medicine was born.”

Suh Kyung-bae said Sulwhasoo will not settle for having maintained the No. 1 position in the domestic oriental medicine cosmetics market for more than 10 years.

“We will position Sulwhasoo as Asia’s outstanding global premium brand in the world by promoting the value of true Asian beauty and a high-quality scientific basis of herbal medicine,” he said.