A worker assembles door modules at the PHA Czech plant in Cesky Testin, Czech Republic, recently, which are to be supplied to the Hyundai Motor plant nearby. Provided by Hyundai Motor Group

“Our factory is running around the clock and our employees are also working on weekends,” said Kim Chan-jung, president of PHA Czech.

With the expansion of production at Hyundai and its affiliate Kia Motors plants in the Czech Republic and Slovakia, respectively, their subcontractors, mostly Korean auto parts producers that followed in the footsteps of Hyundai and Kia and set up factories in Europe, are benefiting from their partnership with the two leading automakers.

It is important for subcontractors to secure a large enough volume of sales when they build plants abroad to go along with large buyers like Hyundai and Kia, and the partnership turns out to be successful for both subcontractors.

In addition to the Czech plant, PyeongHwa Automotive also has plants in Slovakia, India, China and the United States, where Hyundai or Kia have manufacturing facilities. 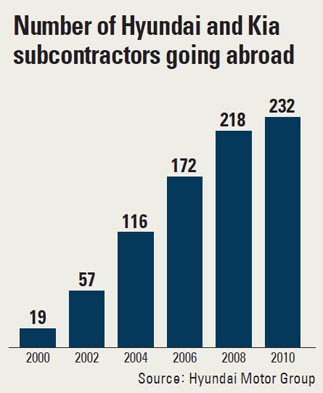 “It is important for subcontractors to have a stable amount of sales to do business overseas,” Kim said. “As Hyundai cars produced in the Czech Republic are popular in Europe, our plant is running at full capacity.”

With the production of the new i30 beginning next year at Hyundai’s factory in Nosovice, a 30-minute drive from the PHA plant, the PHA factory is expected to be busier than ever. The hatchback accounts for 70 percent of Hyundai’s production in Nosovice.

“I feel a little tired when I work on weekends, but the pay is good and everyone here is proud of working here,” said Roman Hruby, a 31-year-old worker at PHA Czech.

Including PyeongHwa Automotive and Hyundai Mobis, 19 subcontractors have entered Europe. Both Hyundai and Kia have supported their subcontractors to move abroad. Including the 19 in Europe, a total of 233 subcontractors of the two automakers have gone overseas.

A free-trade agreement between Korea and the European Union took effect in July. It benefits local companies that have manufacturing bases in Europe as parts exported from Korea are exempted from duty.

As of July, the tariff of between 2.5 percent and 4.5 percent on Korean exports of automotive components to Europe was eliminated.

The subcontractors reassemble parts from Korea and supply finished components to Hyundai and Kia, and no tariff means more price competitiveness for their products.

According to the Korea Customs Service recently, Korea’s auto components exports to Europe grew 21 percent on-year to $1.03 billion during 100 days since the FTA began on July 1. This is particularly meaningful since the European economy is experiencing a downturn.

These components manufacturers are not only supplying auto parts to Hyundai and Kia but also to their competitors. According to Kim, president of PHA Czech, it is supplying to 29 carmakers around the world, with 10 in Europe, including Volkswagen. Rather than discouraging partnership with competitors, Hyundai and Kia are encouraging their subcontractors to supply parts to other companies, according to Kim.

Hyundai and Kia said yesterday they plan to donate $300,000 and $100,000 respectively to the Turkish government for relief to help the country recover from a recent devastating earthquake.