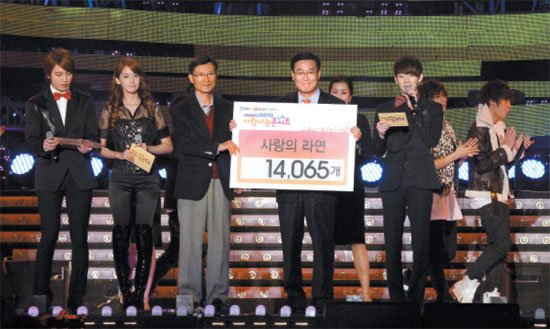 Nongshim has been hosting the “Love Share Concert” since 2000. Last year alone the audience donated 9,000 Rice noodle Beef Jajangmyeon instead of the purchasing tickets and Nongshim donated 1,800 bags of Sumichip. A total of 14,000 bags of “Love Ramyun” has been delivered to families through the Korean National Red Cross. Until now through the 11 concerts about 447,000 bags of noodles and snacks have been delivered to neighbors in need.

Nongshim has also created the “Nongshim Social Contribution Organization” and is actively participating in social contribution work. It is holding voluntary activities in regards to social welfare facilities such as centers for children and elderly people. Last year using the “Happy Fund,” which is a donation fund raised by the employees, the company delivered 2,000 boxes of Shin Ramyun to Dongjak Welfare Foundation so they could be delivered to welfare facilities, foster homes, elderly people who live alone and single parent families. The Happy Fund is raised by the employees and so far 220 million won ($199,275) has been collected.

In 2008, with Unicef, Nongshim promoted the “Endless Sharing Campaign” and delivered 100 million won, which is part of the 2008 profit from sales of “Akimeobsi Dameon Ramyun, a children’s noodle, to Unicef so it could use it to improve the nutrition and health of African children. Since 2002 Nongshim has been donating its product to the Food Bank to utilize its food resources effectively and to help the neglected people. So far it has donated about 1 billion won worth of products.

Nongshim is also collecting old mobile phones from its employees and their families in order to prevent environment pollution and protect our precious water resource recycling. The collected used mobile phones (body, battery and charging line) are delivered to the Green Consumer Network in Korea. About 1,850 used mobile phones were collected. Nongshim has delivered its will to realize environment management through reusing resources and commented that it will use this opportunity to recognize the importance of saving resources through this activity.

Through corporate social responsibility management of the entire company, Nongshim is delivering and sharing its warm love with the regional society and customers and is fulfilling the role of a social company.