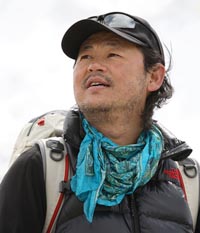 The families of a renowned mountaineer and two teammates who went missing in the Himalayas held a memorial service at their base camp 4,200 meters above sea level yesterday.

A memorial service in Korea for Park Young-seok and fellow climbers Kang Ki-seok and Shin Dong-min will be held for three days starting tomorrow at a Seoul hospital, according to the Korean Alpine Federation, which led the search operations.

“Eight people, including Lee In-jeong, head of the KAF, and family members of the climbers, attended the ceremony at the base camp after looking around the region in two helicopters where the three are believed to have gone missing,” a KAF spokesman said in a press briefing here.

Also attending the ceremony were members of the Korean search team.

On Saturday, the federation said the search for the three missing climbers had ended for the year due to safety concerns. It pledged to resume the search next year.

The families of the missing climbers as well as the rescuers will leave for Seoul on Monday, and four to five KAF officials will remain at the camp to pack up, the spokesman said.

Park, Kang and Shin were attempting to scale Annapurna when their base lost contact with them on Oct. 18. Annapurna is one of the world’s 14 highest peaks, which are collectively called the “eight-thousanders” because each is at least 8,000 meters above sea level.

Park, 47, gained fame as one of the world’s most successful climbers. In 2005, he became the first in the world to complete the true Adventurers’ Grand Slam, which entails reaching the North and South Poles, scaling the 14 eight-thousanders and the Seven Summits, which are the highest peaks on each of the seven continents.

Park was the first of four Koreans to climb all 14 eight-thousanders. He had already scaled Annapurna and returned this time to try a different route on the mountain’s southern side.