Ahn bids adieu to China after 3 seasons at Dalian

Ahn bids adieu to China after 3 seasons at Dalian 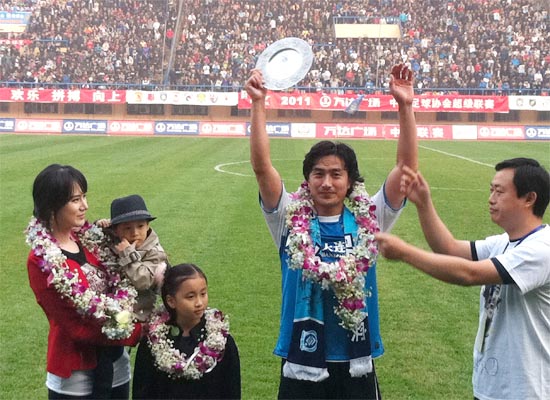 
Korean footballer Ahn Jung-hwan said he is not sure whether he will play in the K-League next year following his departure from Chinese club Dalian Shide FC.

Ahn played his farewell match for Dalian on Saturday, ending his three-year spell in the Chinese Super League.

While former FC Seoul coach Nelo Vingada took the helm in Dalian in July, replacing Ahn’s compatriot Park Sung-hwa, the striker saw less time on the pitch compared to previous years. With a lingering knee injury added to the mix, it was reported that Ahn decided not to extend his contract with the club.

On Saturday, Ahn wore the captain’s armband for Dalian and played his final match against Jiangsu Sainty FC for 45 minutes. During halftime, his club held a farewell ceremony for Ahn while home fans chanted to show their support. It was the first time in the club’s history that a foreign player received a farewell ceremony.

Ahn said it was unfortunate that he couldn’t understand what Chinese fans were chanting because of the language barrier.

“If the farewell match were held in Korea, my heart would be moved since I would be able to understand the language,” Ahn said to Ilgan Sports, the JoongAng Ilbo’s daily sports newspaper, after the match on Saturday. “However, since I can’t understand Chinese, it was difficult for me to experience that feeling.”

But Ahn said he had a good experience while playing in China. The former Korean international recalled that he didn’t like the long travel times for away games, but said he was impressed with how the Super League is growing, adding that Chinese football is developing as many foreign players enter the league.

“Top teams in [the Super League] are almost at the same level as teams in the K-League,” Ahn said. “Teams like Guangzhou Evergrande FC are really good and I think the club could win the AFC Champions League next year.”

Ahn, who played with Busan I’Park and the Suwon Samsung Bluewings before moving to China, said he has already received offers from K-League clubs. The striker has yet to make a decision on his future.

“I think it would be good for me to come back to the K-League and help the league in a marketing perspective,” Ahn said. “But what I’m worried about is that if my performance is poor, I may not have a happy ending to my career.”

Ahn had his golden days from the late 1990s to the mid-2000s. The attacker was the first Korean to play in the Italy’s Serie A when he signed with AC Perugia in 2000 after he was voted K-League MVP in 1999. He also played for French side FC Metz and German club MSV Duisburg.

Probably Ahn’s most memorable performance came in the 2002 FIFA World Cup, where he helped Korea reach the semifinal with a golden goal that knocked out Italy in the round of 16. His header sent past Italian keeper Gianluigi Buffon was the highlight of his performance throughout the World Cup.

But Ahn said those days are now becoming somewhat of a burden, as Koreans remember his heroic days and compare them with his current level of play.

“I know I can’t play like I did in 2002,” Ahn said. “But people will judge me and compare my current performance to past days.”

But since injuries keep bothering him, Ahn said he is starting to think about retirement - an option that is still on the table.

“I thought I may quit when I turned 30, but I played longer than I thought,” Ahn said. “I had really good form last year, but since I injured both knees, I really felt my form is declining.”

Ahn is expected to return to Korea later this month.