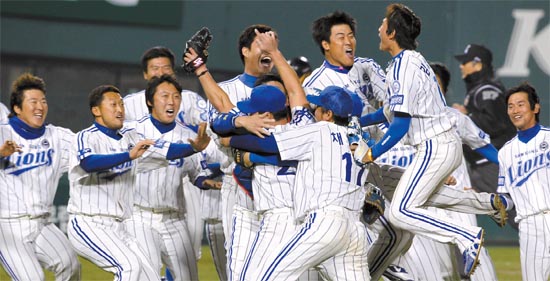 Revenge in the Korean Series - The Daegu Samsung Lions celebrate after winning the 2011 Korean Series yesterday at Jamsil Baseball Stadium in Seoul. The Lions claimed their fourth Korean Series title and the franchise’s first since 2006 in a 1-0 Game 5 victory over the Incheon SK Wyverns to take the best-of-seven series 4-1. Lions’ closer Oh Seung-hwan was voted as the series MVP. [YONHAP]


SEOUL - The Daegu Samsung Lions are the champion of Korean professional baseball in 2011.

The Lions beat the Incheon SK Wyverns 1-0 in the Korean Series yesterday at Seoul's Jamsil Stadium, taking the best-of-seven set in five games. This is the Lions' first Korea Baseball Organization (KBO) title since 2006.

Samsung's Kang Bong-gyu hit a solo home run off SK starter Brian Gordon in the bottom of the fourth, and starter Cha Woo-chan was effective over seven scoreless innings before handing the reins over to the dominant bullpen.

The Lions avenged their Korean Series defeat to the same Wyverns last year. SK swept Samsung in four straight games then to claim its third championship in four seasons.

Kang broke the scoreless deadlock in the fourth, taking Gordon just over the fence in left for his first home run of the Korean Series. For the Lions' pitching, rated the KBO's finest in the regular season, that was all the offense necessary.

Cha, who had pitched three shutout innings in relief in the first game, fooled SK hitters to the tune of seven strikeouts in seven innings. He gave up five hits and two walks.

The Wyverns wasted a bases-loaded chance with one out in the second, as Jung Sang-ho and Park Jin-man both struck out to end the rally.

In the eighth, Jeong Keun-woo led off with a single and reached second on a sacrifice bunt. Park Jung-kwon was intentionally walked, but with the potential tying run on second with two outs, Ahn Chi-yong hit a weak pop up to short off Samsung's closer Oh Seung-hwan.

Cha earned the win and Oh got the save. Gordon was tagged with the loss after giving up three hits and a run off Kang's home run in four innings.

Oh was voted the most valuable player (MVP) of the series, after picking up three saves. He has six career saves in the Korean Series, already an all-time record.

Manager Ryu Joong-il became only the third KBO bench boss to win the Korean Series in his first year. Ryu spent 13 years with the Lions as an All-Star shortstop and another 11 as a coach before taking over as manager in January this year.

In the five games this series, the Lions scored only 13 runs, eight of them coming in Saturday's Game 4 victory. The Wyverns managed just seven runs.

The Lions had the bye to the Korean Series by virtue of finishing first in the 133-game regular season and had a break of about two weeks. The Wyverns, who ranked third among four playoff-bound clubs, had to play two rounds of the playoffs before meeting the Lions.