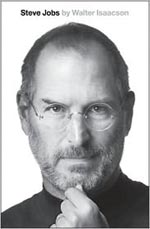 Based on more than forty interviews with Jobs conducted over two years - as well as interviews with more than 100 family members, friends, adversaries, competitors and colleagues - Walter Isaacson has written a riveting story of the roller-coaster life and searingly intense personality of a creative entrepreneur whose passion for perfection and ferocious drive revolutionized six industries: personal computers, animated movies, music, phones, tablet computing and digital publishing.

At a time when America is seeking ways to sustain its innovative edge, and when societies around the world are trying to build digital-age economies, Jobs stands as the ultimate icon of inventiveness and applied imagination.

He knew that the best way to create value in the 21st century was to connect creativity with technology.

He built a company where leaps of the imagination were combined with remarkable feats of engineering.

Although Jobs cooperated with this book, he asked for no control over what was written nor even the right to read it before it was published.

He put nothing off-limits. He encouraged the people he knew to speak honestly. And Jobs speaks candidly, sometimes brutally so, about the people he worked with and competed against.

The Novice: A Story of True Love 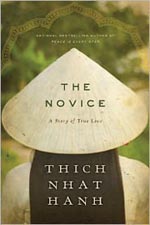 Bestselling author and Zen master Thich Nhat Hanh transforms an ancient folktale into a timeless parable of a young woman who dares to risk her life for her faith.

Born to an aristocratic family in rural Vietnam, Kinh Tam’s uncommon beauty and intelligence were obvious to all she encountered.

From an early age she was drawn to the teachings of Buddha and the rewards of a monastic life, but to please her family she agreed to walk the traditional path of marriage.

Throughout her marriage, Kinh Tam’s mind was devoted to her husband but her heart never wavered from her true calling. She wanted to be a monk. And yet Buddhism was still new to Vietnam and temples accepted only men for ordination.

Making a decision that would forever change her life, Kinh Tam left town, disguised herself as a man and joined a monastery as a novice.

Despite the many challenges of living as a man, Kinh Tam thrived and became a beloved member of the community. Years of profound joy and peace passed until a local woman accused the novice of fathering her unborn child.

Kinh Tam is torn between two impossible choices: keep her secret and endure brutal punishment or reveal the truth that would prove her innocence but put an end to her spiritual path.

The Dragon’s Child: A Story of Angel Island 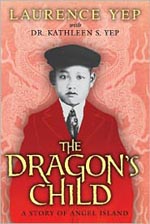 Did you want to go to America?

Were you sad when you left your village?

Ten-year-old Gim Lew Yep knows that he must leave his home in China and travel to America with the father who is a stranger to him.

Gim Lew doesn’t want to leave behind everything that he’s ever known. But he is even more scared of disappointing his father.

He uses his left hand, rather than the “correct” right hand; he stutters; and most of all, he worries about not passing the strict immigration test administered at Angel Island.

The Dragon’s Child is a touching portrait of a father and son and their unforgettable journey from China to the land of the Golden Mountain.

It is based on actual conversations between two-time Newbery Honor author Laurence Yep and his father and on research on his family’s immigration history by his niece, Dr. Kathleen Yep.