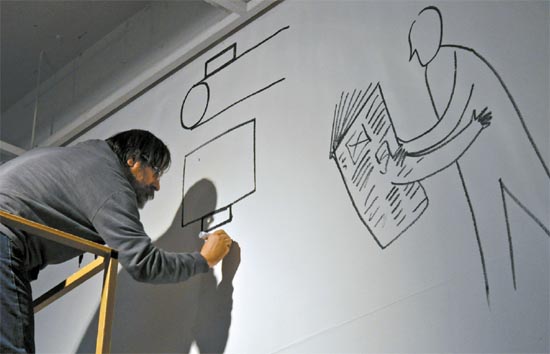 
All he needs is a black marker and a sheet of newspaper or a section of wall. With these humble materials, Romanian artist Dan Perjovschi, 50, uses his simple black-and-white drawings to comment on complex global issues. At first glance, his works look like those of a child who is learning to draw, but this deceptive simplicity masks a deeper insight into current affairs and has made him a force in the mainstream art scene.

Perjovschi first captured the world’s attention at the 48th Venice Biennale in 1999 where visitors watched as he covered the floor with drawings, and he is one of the most active contemporary artists of today. His first U.S. exhibition, “Projects 85: Dan Perjovschi,” at New York’s Museum of Modern Art in 2007 is still remembered by critics as impressive.

Perjovschi first gained recognition for his talent when, at the age of 10, he was identified by the Romanian government as a child prodigy. He received a formal education in art, but as an adult, he decided he wanted freedom from such conventional forms.

The style he developed is a combination of drawing, graffiti and cartoons, with a touch of humor. Like a performance artist, his work is temporary, and he often draws directly onto the surfaces of museums and galleries and on newspapers while visitors watch the transformation.

As a young artist, Perjovschi also tried to promote Romanian art outside of his country, but it wasn’t easy in the Socialist republic, where censorship was still a barrier, according to Nathalie Boseul Shin, the curator at the Total Museum of Contemporary Art in Pyeongchang-dong, northern Seoul, where the artist’s drawings are currently being shown in his first exhibition here, “The News after the News.”

“Living in a Socialist state, it wasn’t easy for artists to show their works outside the country,” Shin said. “That’s why Perjovschi uses newspapers as his main material because they are easily carried out [by anyone].”

In a world where an artist’s worth is often judged by price, Perjovschi eschews the idea that art should be owned by individuals. He even asks galleries to erase his drawings after each exhibition comes to an end.

“If a drawing is owned by a single person, Perjovschi thinks it’s unfair because it’s not shared by others,” Shin said.

The bearded artist came to Korea in late September to prepare for the exhibition, drawing on newspapers and the gallery walls after having spent several days observing Korea and its people. According to Shin, about 80 percent of the works in the exhibition were drawn by the artist on the spot.

The Korea JoongAng Daily interviewed Perjovschi, who had since moved on to Switzerland for his next exhibition, via e-mail to ask him about his work and his impressions of his short trip to Korea. Here are excerpts from the interview.


Q. How was your short trip to Seoul? What kinds of drawings did you do at the Total Museum? 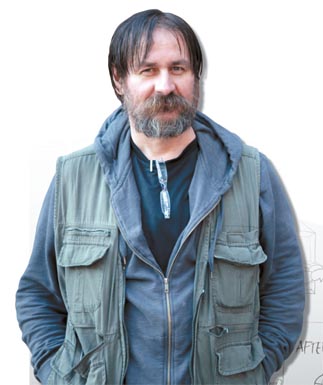 A. As usual, I do half of the drawings from previous projects and half that I invent on the spot. It is not a strict proportion. I am inspired by local and actual events, but some of the drawings aspire to a more universal condition.

That is why I keep repeating them. My projects have a precise mix of political, social and cultural topics. I did the same in Seoul. It was a condensed and strong experience.

[The drawings Perjovschi did for the exhibition reflect his interest in coffeehouses and people who carry smartphones wherever they go.]

You seem to have a great deal of interest in the social and cultural issues of many countries. Did you have a chance to get to know the cultural or social issues of Korea during your stay?

Seoul is like my country. You need years to research it. I do not have the pretension that I’d go deep into psychoanalyzing the Korean people, but I did observe some things. There are a lot of coffee shops and open terraces, which is more like European culture. People spend a lot on their looks. They work long hours and are creative in their protests and resistance - see the lady on the crane, etc.

[Perjovschi is referring to Kim Jin-sook, a labor activist with the Korean Confederation of Trade Unions who has been staging a sit-in atop a crane at Hanjin Heavy Industries in Busan for nearly 300 days in protest against layoffs at the company. Kim says she will come down if Hanjin reaches agreement with the employees who have been laid off.]

Your drawings are sort of like public art because they are often drawn on the walls where everyone can watch and enjoy the process. What is your definition of good public art?

I also use newspapers as a medium of art, and newspapers are a public space. I think contemporary cities, being such complex organisms, can develop more interesting public art than simple metal sculptures.

I’m more of a commentator than an inventor. There are such smart people around and such good ideas. Catch them and transform them in reality. An agora, a public forum, can be public art. Keep that crane!

Many people think of drawing as the first stage in the creation of art, but your drawings are taken seriously on their own. Why do you think people like them so much?

Drawing is the essential and the basic language. We all know how to draw when we are little kids. It comes from within. For me, it is not a preparatory medium. It is the medium. Drawing can have the same complexity as a new media work. I choose drawing because it is more direct, more radical and more of a statement than other mediums. My drawings are black and white because of a conceptual decision. I want to keep them apart from the aesthetic, decorative and craft understanding of art. For me, art is political.

How did you come up with your style, which mixes drawing, animation and graffiti?

I was trained as an artist for 12 years in Communist Romania. Then I abandoned color and went into graphics and press illustration. I worked hard for 15 years to accomplish this mix of art brut [outsider art], press drawings and graffiti.

Many renowned artists, regardless of their nationality, tend to live in New York or Britain, where they can easily meet and collaborate with other artists. But you live in Bucharest, Romania. Why is that? And what aspects of Romanian culture have affected you the most as an artist?

I was and I am deeply involved in the political, social and cultural transformation of my country. I can influence things there while I stay. I cannot renounce the long fight we went through to democratize the country and advance the culture.

I belong to the wave of artists that is changing the art scene and the understanding of the arts in my country. I came from dictatorship, and now I resist in democracy. It is about freedom and not about the market.

Besides, New York, London and sometimes Berlin can be boring. Western art is about the market and money. They talk not about what but about how much.

Besides, if you come to Bucharest, you will want to meet me, but if I lived in Paris, would you choose me for an interview from among the thousands of artists living there?

What does drawing mean to you? And what do you want to say through your drawings?

My art is my life. I draw to know. I travel the world drawing it. And while discovering others, I discover myself.


*“The News after The News” continues through Dec. 4 at the Total Museum of Contemporary Art in Pyeongchang-dong, Jongno District, northern Seoul.

* Majored in painting at the George Enescu University of Arts