Journalist delves into the personal life of Karl Marx

Journalist delves into the personal life of Karl Marx 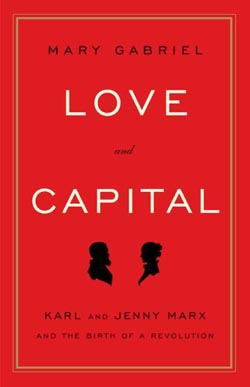 The result is a revealing portrait of Marx as a husband, father and human being inside a thorough account of the poverty, persecution and death that haunted the family of a man whose political theories would change the world. Gabriel, whose book has been nominated for a National Book Award in the United States, spoke to Reuters about her work: “Love and Capital: Karl and Jenny Marx and the Birth of a Revolution.”


Q. Wasn’t Marx a crowded field for a writer?

A. There are libraries of books on Marx and books on his theory in every conceivable language, but I was shocked to find that among all those volumes there was not a single book that focused on Marx and his family. Marx’s personal life has been a controversial subject from the time of his death in 1883.

Immediately after his burial, efforts began by his followers to sanitize his story so that this ‘socialist god’ would not seem human.

I believed there was room for another biography that told the story of Marx and his family, that readers ought to be introduced to Marx as a husband, father and friend - for better or worse. Readers will see that this man was not at all the stern patrician he appeared to be in socialist and communist propaganda. I also found that uncovering the private Marx helped me understand his theory. Having done so, I can’t imagine reading Marx’s works without understanding the circumstances in which they were written and the historical events that were unfolding around him as he did so.

What surprised you most about Marx?

I was shocked by how approachable Marx was, and how much, by the end of the project, I enjoyed his company (I “moved in” with the Marxes for about eight years.) There is a silly question people are often asked about political candidates - “Which one would you most like to have a beer with?” By the end of the book, I would answer Karl Marx! He was funny, brilliant, passionate and completely exasperating, which in a sense only made him more endearing.

I came to the book with an image in my head of Marx’s Highgate monument. He was utterly remote - no doubt as stony in life as he was in death. But when I encountered him in his letters, or those of his friends and family, and understood his commitment and the sacrifices he made for his work, I realized how wrong I had been about him. Whatever one thinks of his politics or vision, one can’t ignore his dedication to his mission - which he believed was to save mankind from the excesses of capitalism.

Do you think Marx would have been surprised by how “communism” under the Soviets actually turned out?

I think Marx would have turned over in his grave if he had lived to see Lenin or Stalin at work. Soviet Russia could not have looked less like Marx’s vision of a communist society - which in fact was never completely articulated. From the time he was a young man, Marx abhorred the notion of the state imposing its will upon the people. He had a horror of state surveillance of citizens, a surveillance he was subject to. And he would have never advocated state violence in order to suppress dissent. In many ways the Soviet state reflected Marx’s personality - he was easy to anger and had little patience with those who disagreed with him - more than his theory. I am convinced he would have been a committed anti-Soviet.

Of all the characters, who did you admire most and why?

I really loved Jenny Marx, Karl’s wife, and his eldest daughter Jennychen, but I must say I enjoyed Marx’s closest collaborator Friedrich Engels most of all. Engels was part playboy, part savior; part soldier, part philosopher. He was, in fact, much more complicated than Marx. Through the years, he has been one of the most misunderstood historical figures. He is either not given the credit he is due: his role in Marx’s life and work was integral; he was, as Marx called him, his alter ego. Or he has been blamed for the excesses of 20th century communism, as if his writing deviated so much from Marx’s that it spawned its own brutal form of communism. The two men worked so closely that their handwriting shared the same page. Engels knew Marx’s works and theories as well as Marx did, and his superhuman loyalty to his friend certainly did not abandon him when he was left to edit Marx’s final two volumes of “Das Kapital.”

In fact, Engels not only provided Marx with the all-important “material” upon which to build his economic theories, by introducing him to the actual horrors of industrial capitalism, which he knew intimately because he worked at his father’s factory in Manchester, England, but he also gave Marx the material means to survive. Throughout their relationship, which lasted for nearly 40 years, Engels supported the Marx family. He did this with an unfathomable spirit of generosity and belief in Marx’s genius. While writing, whenever the Marx family’s own story became too grim, I was thrilled to be able to escape into Engels’s world.


Love and Capital: Karl and Jenny Marx and the Birth of a Revolution