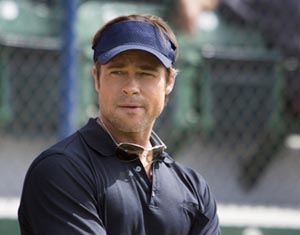 Ilgan Sports, the JoongAng Ilbo’s sports daily, said in an exclusive report released yesterday that the A-list Hollywood actor will fly to Seoul for the first time in order to promote his latest film “Moneyball.”

“Moneyball” is based on American author Michael Lewis’ 2003 novel of the same name about the Oakland Athletics baseball team. The team, which always ranks near the bottom in the Major League, faces a challenge when Billy Beane (Pitt) is designated as general manager and adopts a new system for drafting players. Under the new system, traditionally undervalued players with high potential are chosen regardless of their personal problems.

Pitt had previously scheduled promotional trips to Korea but all were postponed. When Pitt’s partner Angelina Jolie visited Korea July last year to promote her film “Salt,” it was rumored that Pitt would accompany her, but the rumor proved false.

“Moneyball” is slated to open Nov. 17 at theaters nationwide in Korea.