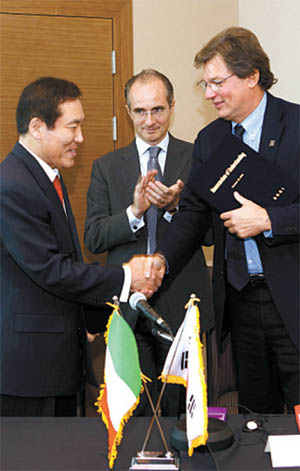 At the Sheraton Seoul D Cube City Hotel the president of the Udine Chamber of Commerce, Giovanni Da Pozzo, (right) signs an MOU on Oct. 27th with the vice chairman of the Korea Chamber of Commerce and Industry, Shin Bark-jae, as the ambassador of Italy, Sergio Mercuri, observes. Provided by ICE Seoul

The Italian Trade Commission, the trade promotion section of the Italian embassy in Korea, on Thursday sponsored a forum on trade and commerce to promote economical cooperation between Korea and Friuli Venezia Giulia, a vibrant portal region in northeastern Italy.

Friuli Venezia Giulia, known for its thriving industry with 98,704 companies, is a small Italian region that borders the Alps in the north and the Adriatic Sea in the south and through its strategic location bordering Austria and Slovenia.

Exports from the region include but are not limited to furniture, especially from Friuri’s Chair District, cured ham from San Daniele, knives from Maniago, cruise ships and mechanical goods. A well-recognized export is Illy coffee. The area is divided into Trieste, the portal capital of Fruili, Udine, Pordenone and Gorizia.

On Oct. 27th, the president of the Udine chamber of commerce, Giovanni Da Pozzo, signed a memorandum of understanding with the vice chairman of the Korea Chamber of Commerce and Industry, Shin Bark-jae.

The Udine commerce president said, “Lately, Friuli has had an increasing international mediatory role in European commerce due to its central location in the middle of Europe.” He also expressed his hopes to see further economic exchange between Friuli and Korea.

Representatives from the Trieste Marine Terminal also led the afternoon seminar which invited potential Korean partners, including experts in distribution and logistics, to share ideas.

Trieste port is an important location dating back to the Habsburg Empire north of the Adriatic Sea. The port is undergoing expansion, building extensions as well as additional railway lines and roads.

The foreign trade exchange between Italy and Korea is $7 billion while trade with the Friuli region is 130 million euros ($182 million).

The Ambassador of Italy, Sergio Mercuri, expressed that especially in light of the EU-Korea free trade agreement, which came into effect on July 1, 2011, he would like to see Friuli become “a network open to the rest of the world with its three major ports as an accessible gateway to Europe.”