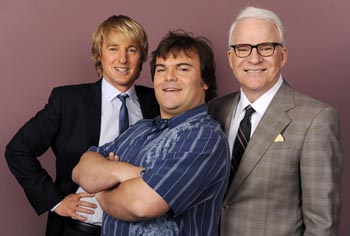 LOS ANGELES - Veteran actor and comedian Steve Martin, above right, is writing a book based on his Twitter posts, with all profits going to charity, the book’s publishers said on Friday.

Martin announced the book via Twitter in a tweet that said “Due to absolutely no demand, soon I’m publishing a book of my tweets. Many of your replies included! All my profits to charity.”

The book will be called “The Ten, Make That Nine, Habits of Very Organized People. Make That Ten,” and will be a collection of Martin’s tweets as well as responses from followers, publisher Grand Central Publishing said in a statement. It is due for release in the summer of 2012, and all profits will go to charity.

The 66-year-old “Pink Panther” actor has embraced the social networking site, building a fan base of more than 1.7 million followers.

The actor’s last book, a novel called “The Object of Beauty,” was published in 2010 and made the New York Times bestseller list.

Martin is currently appearing alongside Owen Wilson, above left, and Jack Black in the comedy “The Big Year,” which was released in U.S. theaters earlier this month.