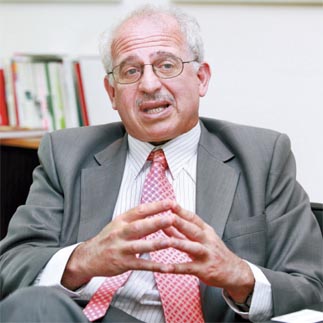 Swiss Ambassador to Korea Thomas Kupfer said there are two special characteristics of Switzerland: vocational training education and the role of its small- and medium-sized companies that make up 90 percent of the economy, despite Switzerland’s well-known multinationals.

“The Swiss Business Hub Korea is basically a Swiss agency similar to the Korea Trade-Investment Promotion Agency (Kotra), but smaller. We have four of these offices in Asia including: Japan, China, ASEAN (based in Singapore) and Korea,” said Kupfer. “We chose Korea to locate our fourth office in Asia as there’s growing importance in Korea for our economy.”

The Swiss Business Hub Korea, which is located inside the Swiss Embassy in central Seoul, works with Swiss companies, especially small- and medium-sized enterprises, to help Korean companies to expand into the Swiss market by providing specific market information and business contacts as well as business consulting.

“Just yesterday, a group of businessmen from the canton of Vaud came to Korea through the Swiss Business Hub Korea to get in touch with the Korean economy,” said Ambassador Kupfer. “So last night, the Embassy of Switzerland organized a dinner for them by inviting some Korean businessmen as well so they can get to know each other.”

Ambassador Kupfer said the economic delegation from the canton of Vaud (Lake Geneva region) will next attend a seminar on innovation, co-hosted by the Korea Chamber of Commerce, as well as visit various industrial locations in Korea including: Sangam Digital Media City, headquarters of SK Telecom; SK Holdings; KT; Wonju Medical Industry Techno Park; Chuncheon Bio-industry Foundation; and Samsung Electronics in Suwon, during their four-day stay, organized by the Swiss Business Hub Korea.

“In Switzerland, we have big companies such as Nestle and Swatch, which are known worldwide, but most of the Swiss companies are small- and medium-sized companies. And many of these companies are very active in exports, unlike Korea, where its economy is based on large conglomerates,” said Kupfer. He explained that is why successful and young people in Switzerland are often more than happy to work for SMEs.

According to Ambassador Kupfer, about two-thirds of all Swiss youth participate in some form of vocational training at the upper-secondary level, which allows young people to have more practical abilities and leads to diverse job opportunities.

“Only about 30 percent of high school graduates go on directly to university, but much more go on to vocational schools. That means at 18 years old, you are already a qualified gardener or a qualified electrician with a proficient diploma,” said Kupfer.

“I believe the Korean government is making real efforts to improve and give more importance to SMEs as well as make more balanced relations between chaebols and SMEs, but it’s still not there,” said Kupfer. “In Switzerland, the role of SMEs is much more important than in Korea.”

Ambassador Kupfer explained that the Swiss Business Hub Korea also plays a role in informing the Swiss public and companies as to the potential of Korea in trade and economy.

“Often Korea is not yet well-enough known in Switzerland. They know its famous products like Samsung and LG electronics or the Hyundai and KIA cars, but Korea is still less well-known than Japan and China as it came later into the market,” said Kupfer. “But once people come here and see the dynamics of Korean industry and trade, they are much impressed and they stride to establish business relations with Korea.”

But the Ambassador said there are a number of limitations that make it harder for Swiss companies to enter into the Korean market and one of the major factors is the language.

“Korea still needs to further develop its system to attract more foreign investments. To give a small example, Korea should ensure that documents are written in English to make it easier for them to communicate,” said Ambassador Kupfer.

“Switzerland is in the center of Europe and we have a very good education system and good infrastructure as well as political economic stability. All these factors can be of interest to Korean companies,” said Kupfer. “It is also part of our intention to have the Swiss Business Hub in Korea to attract Korean companies to establish European headquarters in Switzerland.”