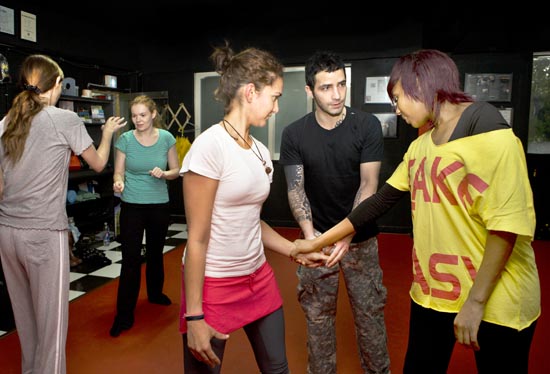 
Korea’s reputation as a relatively safe place to live and socialize is well known among the expat community. But this kind of environment can also create a false sense of security, leading people to forgo the usual self-protection measures. And women need to be vigilant no matter where they are, according to Anna Desmarais, who last month organized a free self-defense workshop for women in the Itaewon area in central Seoul.

“I think that Seoul, just like any big city, can be unsafe. There is the possibility somebody could attack or assault you,” Desmarais said. “But I think the difference here is that everybody thinks it’s safe so they don’t take precautions like you would do in any other big city.”

Seven women, all expats, participated in the hour-long class at Body & Seoul, a fitness club run by Desmarais in Gyeonggnidan, on Oct. 15.

“Maybe he wants to grab you,” instructor Gideon Roth told the class as he acted out a scene with his assistant. “The first thing you do if he pulls you is not pull away but raise your hand and strike, strike, strike.”

As Roth simulated other situations, the women in the class seemed eager to learn more.

Between simulations, the women were given time to practice the skills.

May Tyrrell, a 24-year-old participant from Canada, said the techniques are important for women.

“I think it is helpful for any woman, any place, for sure, including Korean women,” Tyrrell said. “Because it makes you realize what power you have, you’re aware of that. Even it’s only an hour, you have some means of defense, it’s more like awareness of your mentality.”

This was not the first free self-defense workshop for women Desmarais has organized.

She hosted the first one last year, a few months after she opened the fitness club. She and her co-organizers decided to restart the program when reports of crimes against women increased.

In late September, two U.S. soldiers were charged with raping two young Korean women in their teens in two separate cases in Seoul and Dongducheon, Gyeonggi. Both incidents took place late at night.

After the incidents, there were complaints that the U.S. Forces’ decision to lift its nighttime curfew had contributed to the increase in crimes against women in some areas of the country frequented by foreigners.

According to data from the Korean National Police Agency, the number of U.S. soldiers charged with crimes committed here including rape and burglary surged more than twice from 183 in 2008 to 377 last year.

In response to the two rape cases, the USFK has temporarily reinstituted the curfew for one month beginning Oct. 7.

Kelly Frances, a Canadian expat who co-organized the workshop, said she felt she wanted a self-defense workshop after she barely escaped a hostile confrontation with a group of drunken U.S. soldiers in front of a bar in Itaewon recently.

She said that although she had filed a complaint about the incident with the USFK and Korean police, the two entities passed the case back and forth between them and it is not yet resolved.

Desmarais said she now hopes to make the workshop into a regular or semi-regular program.