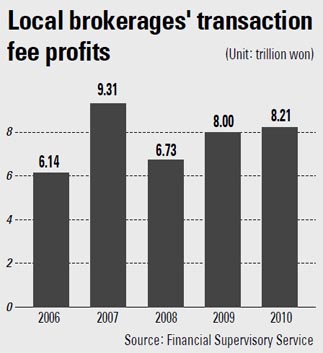 With continued pressure on credit card firms and banks having yielded results such as lower ATM fees, the fire has perhaps spread to securities brokerages.

As financial regulators are reportedly reviewing whether the current transaction-fee structure for stocks, funds and other investments has room for improvement, public authorities overseeing investment transactions such as the Korea Exchange (KRX) and the Korea Securities Depository (KSD) have increased pressure by cutting their own fees charged to brokerages.

With regulators stating there is room for reductions in brokerages’ profits of up to 9 trillion won ($8.1 billion) per year from transaction fees alone in the last five years, leading brokerages have answered the wave of criticism for the financial industry’s “profit-taking” by rolling out plans to cut handling fees.

However, insiders are balking at what they privately say is undue pressure to cut fees that are already low when more substantial benefits could come from cutting taxes on stock transactions.

Yesterday, top securities brokerages including KDB Daewoo Securities, Mirae Asset Securities and Samsung Securities announced that they were joining the movement to cut handling fees by cutting their fees for stocks, index-based futures and option transactions until the end of this year.

Other leading brokerages and asset management firms including Korea Investment & Securities, Daishin Securities and Shinhan Investment Corp. said they are considering a cut in their handling fees.

Such responses were rounded up by the Korea Financial Investment Association, the central trade group for securities brokerages and asset management companies, which said yesterday that it will coordinate a mass cut of the sectors’ investment commission fees as well as prepare an alternative to the current system of late penalties when a customer buys stocks on margin then fails to pay up.

This collective move by the securities investment sector was prompted by the KRX and the KSD, which last week temporarily waived the fees they receive from member brokerages from Nov. 11 until the end of this year.

Korea Exchange, which had charged some 325.6 billion won worth of transaction fees to brokerages last year, charged a further 267.3 billion won from January to August of this year.

“We have plans to conclusively review the fee structure of the financial investment sector,” a Financial Service Commission official told Yonhap News Agency. “We seek to come up with reform measures after we determine the current situation.”

However, insiders within the sector complain that cutting what is already a drastically low fee borne out of cutthroat competition is anything but easy.

“[Brokerages’] handling fees are near zero, what with online transaction fees having dropped to 0.015 percent even without additional cuts,” said one spokesperson for a midsized securities firm.

“People should realize that securities firms are different from banks in that transaction fees are our main source of revenue.”

With transaction fees already low, brokerage officials also pointed out that further cuts are likely to be miniscule - especially because the discounted fees charged by the KRX and the KSD only account for as low as 0.007 percent of the total fees.

“Investment authorities cutting their own fees is going to have little to no effect because the percentage of their share in a brokerages’ transaction fee is extremely small,” said a KRX official.