Hamilton, Massa at it again during Indian GP

Hamilton, Massa at it again during Indian GP 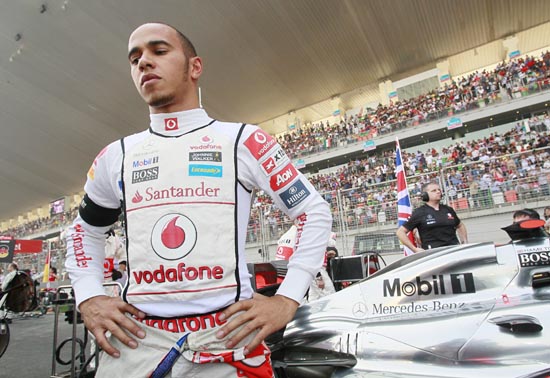 McLaren driver Lewis Hamilton pauses after grid formation of the Indian Formula One Grand Prix at the Buddh International Circuit in Noida, India, on Sunday. [AP/YONHAP]

Hamilton, trapped by Ferrari’s Massa going into a turn at the Indian Grand Prix, shunted the Brazilian across the track before protesting into his radio.

It was their third recent accident after collisions in Singapore and Japan put relations on a knife-edge.

And the latest collision was closely watched by comedy star Atkinson, who was a guest in the McLaren pit and went through a series of his trademark grimaces as the drama unfolded on his TV screen.

Massa was hit by a drive-through penalty but fate threw up another quirk as he crashed out when his left front wheel hit a high curb, mirroring a virtually identical mistake in qualifying.

Hamilton blamed damage from the shunt for his seventh-place finish, which rounded off a tough week in which he announced his split from Pussycat Dolls singer Nicole Scherzinger and then suffered a five-place grid penalty.

“There is not much to say. It’s a disappointing day and my team deserves better,” Hamilton said. “I’ll fly back [to Britain] and try to get my head back in the game.”

Hamilton, who placed second in Korea and was hoping to end his season on a high, remains fifth in the overall standings and is now 26 points back from McLaren team-mate Jenson Button in second.

The 2008 champion said he made an overture to Massa before the race as drivers observed a minute’s silence for IndyCar driver Dan Wheldon and MotoGP’s Marco Simoncelli, who both died this month.

“We had the one-minute silence before the race, I was standing next to Felipe,” Hamilton said. “He’s not spoken to me for a long time, but I made the effort. I put my arm around him and said good luck for the race.

“Then I tried to overtake but I tried to pull out of it as he didn’t give me any space but we collided.

“I had some vibrations on the right-hand turns, it felt like the car was scraping on the ground. I was pushing as hard as I could but I didn’t have the pace.”

But Massa, who was adamant that he should not have been penalized, quibbled with Hamilton’s version of events, although he denied there was any feud between them.

“He didn’t try to do anything,” Massa said. “When I tried to speak to him he passed through. He did not look at my face, so no. Not here.

“After the one minute silence he was at my side and then he just said, ‘have a good race.’ So this is trying to what? Have a good race? Is that not part of talking, or whatever?”

In Singapore, an angry Massa interrupted a TV interview to confront Hamilton after he crashed into the back of the Brazilian’s car, causing a puncture. Two weeks later they clashed again in Japan with Hamilton’s McLaren snapping off part of Massa’s front wing, an accident for which he later apologized.

Hamilton was penalized five grid places in India for ignoring warning flags while practicing at the all-new Buddh International Circuit on Friday.