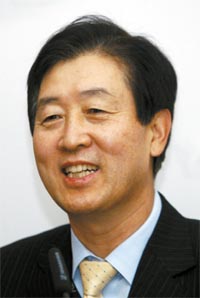 Marking its 42nd anniversary, Samsung Electronics vowed to become bolder in its business - in particular in investment and mergers and acquisitions (M&A).

At a ceremony held yesterday at its Seocho headquarters in southern Seoul, Samsung Electronics’ chief executive officer and vice chairman Choi Gee-sung said “with the global financial crisis and long-term low-growth era, the technology sector is undergoing rapid changes.” He added that “Samsung will turn the crisis into opportunity and engage in more aggressive management.”

In particular, Choi said Samsung will be bolder in investment and M&A in attempts to secure new growth engines such as the health care business. He added that the company will boost business in emerging markets.

The comments echo what Samsung Electronics Chairman Lee Kun-hee told President Lee Myung-bak in August. Shortly after the news came out that Google has acquired Motorola, Lee said “for software competitiveness, be active in M&A.”

However, it’s unclear just how “aggressive” Samsung can be with its limited cash. Cash is crucial in M&A.

Samsung reportedly has just 21.75 trillion won ($19.6 billion) in cash, which is far less than its rivals have. Google is thought to have twice what Samsung has and Apple, according to the U.S. Securities and Exchange Commission, has more than $81.5 billion in cash.

Still, at yesterday’s ceremony, which was attended by some 400 executives, the chief executive also touched on the importance of both hardware and software capabilities.

“In order to get ahead in these times when the technology businesses are realigning, Samsung should maximize its software competitiveness based on its hardware competitiveness,” he said, pledging to integrate and seek synergy between the two.

Choi also highlighted the need for talent discovery and management.

“In any era, the key to overcoming uncertainties and crisis is talent,” he said. “Samsung will work to discover excellent talent in areas of software, service and content among others and also actively foster female talent with both professionalism and flexibility.”