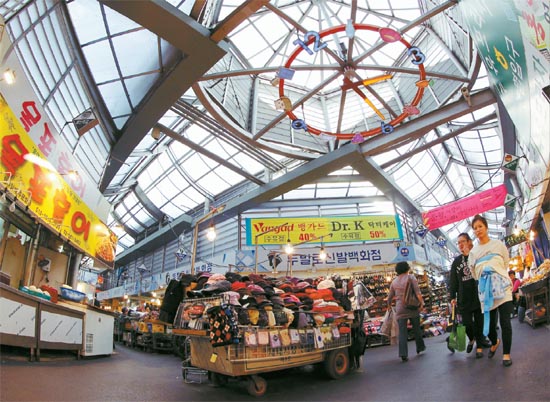 
A supermarket operated by Lotte Mart is located just 500 meters away from a Daegu traditional market and is surrounded by four discount store chains run by retail giants E-Mart, Homeplus and Hanaro Mart within a radius of 1.5 kilometers (1 mile). It is a supermarket but it is quite large in size. Mom-and-pop stores have requested the government regulate the expansion of these markets.

According to a study by the Agency for Traditional Market Administration, daily sales of traditional markets across the country dwindled sharply to 49.8 million won ($44,900) in 2010 from 63.5 million won in 2005, and experts said such markets lost business to discount stores.

Although most Korean traditional markets and small supermarkets are suffering from a drop in customers and struggling to compete against large discount stores that offer everything from abundant parking to tempting indoor displays for customers who relish a bargain, industry sources said some merchants have turned unfavorable conditions around and breathed new life into their markets that were on the brink of shutting down. Some markets shared their success stories.

Market gets a face-lift 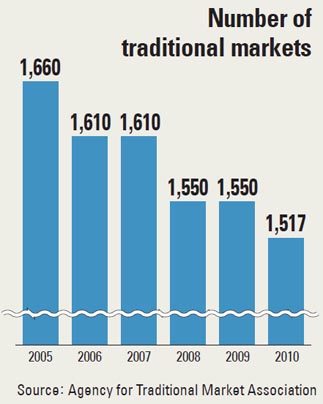 The Seonam Market located in Daegu, which bustled with customers since the 1970s, lost its past glory in the 2000s when it saw its business go to the four large discount chains mentioned above.

The burst of the credit card bubble in 2003 forced customers to rein in spending and merchants at the old-style market were seriously considering moving out, according to Hyun Ho-jong, chief of an association representing Seonam Market merchants.

To save the market, Hyun and four other merchants discovered a state-funded aid program for old-style markets. Hyun appealed to the government to turn the outdated market into an arcade by building a huge plastic roof to cover the vendors in the market.

“The idea was to help customers come and shop conveniently during rain and snow,” Hyun said.

But the idea was met with protest by some merchants as the state-funded aid required merchants to chip in 10 percent of the construction fee.

To fund 400 million won of the 4 billion won construction fee, Seonam’s some 170 merchants had to chip in 2.3 million won each.

“Some merchants said our idea was ridiculous at a time when they were considering going out of business,” he said. “As a last-ditch effort, we brought them to other traditional markets in cities that sheltered their vendors with roofs. After seeing how modern the old-style markets were, they eventually changed their minds.”

Seonam Market’s roof construction began in 2007 and was completed in 2009. A 125-square-meter (1,345- square-foot) lounge equipped with a childcare facility, library and coin lockers was also built inside the market.

Last year, the market provided shopping carts so shoppers can freely move around without having to shop with a bunch of bags in their hands.

To boost the number of potential repeat visitors in the market, Seonam Market this year adopted a point card system.

When a customer visits the market 100 times, even without making a purchase, they can use 5,000 points as a 5,000 won gift certificate to shop at the market, Hyun explained.

“When we bore the brunt of local discount chains’ expansion five years ago, only 4,000 customers visited the market per day,” Hyun said. “But now the number has gone up to 8,000 per day and our sales are growing year after year.”

Some customers said they stopped going to discount stores after Seonam Market got a face-lift.

“The most fun part of going to Seonam Market is that you can have conversations with merchants about their daily lives,” said 43-year-old homemaker Park Jeong-mi. “Plus, you can get deom, which means merchants give you more or another item free when you buy something.”

Seonam is now one of a few places where cosmetics shops Aritaum and The Face Shop and coffee house chains are located along with stores that sell vegetables, seafood and pig hocks.

With Seonam Market steadily restoring its old reputation, the Daegu Metropolitan Government and Dalseo District Office plan to establish a parking lot for the market after demolishing some houses and buildings located next to it.

“I hope Seonam Market will continue to become more vibrant so that one day we will be able to compete with the large discount chain stores without getting aid from the government,” Hyun said.

But it encountered what it remembers as a life-threatening challenge four years ago when seven large discount chains popped up in a 5-kilometer radius of the market.

Han Pal-yong, an official representing Olle Market, said many of his fellow merchants were frustrated by the discount chains’ aggressive marketing strategies.

Until Olle Trails came along.

When Han and his colleagues heard that Olle Trails will be developed, his association members approached and persuaded Jeju Special Self-Governing Province to make one of the routes link to Olle Market to attract tourists and trekkers.

“The Olle Trail effect was so great,” Han said. “After the Olle Trail No. 6 route was opened, people in hiking jackets carrying backpacks poured into our market. In 2010, merchants suggested we should switch the market name to Maeil Olle Market from Maeil Market. Some refused but after persuading my colleagues we needed to change, we managed to change the name to what it is now in May 2010.”

Olle Market attracts 9,000 visitors per day and has become a popular tourist destination for the Seogwipo area on Jeju Island.

While Korean traditional markets used to be popular destinations for homemakers who prepared food ahead of large family gatherings for Lunar New Year and Korean thanksgiving holidays, they’re one of the least favored shopping destinations among younger generation in their 20s and 30s because many of them believe such markets are outdated and inconvenient.

The app will show maps of vendors, mobile coupons and possibly the latest bargain deals happening in Suyu Market.

“The purpose of the contest was to make the Suyu Market more accessible to young smartphone users,” Kim Seon-ho, a senior official representing an association of Suyu Market merchants. “Smartphones and apps become important necessities of people’s daily lives and that’s a hot trend that traditional markets should keep up with. We’ve selected a winner of the app and we plan to release a completed version to app stores soon.”

The market’s association representatives also run their own Facebook and Twitter pages to promote the market on cyberspace.

In December 2009, Suyu Market opened a library inside of the market to encourage merchants to sharpen their marketing strategies. More than 100 people have signed up for library membership and it’s a community gathering place for merchants and Suyu residents.

“To attract more young consumers who will be our future consumers, traditional markets shouldn’t remain as mere spaces for retail commerce but they should be multidimensional destinations for tourism, cultural experience and shopping,” said Jeong Seok-yeon, head of the Agency for Traditional Market Association. “We will continue to transform traditional markets in response to rapidly changing market trend to lure local and international shoppers.”